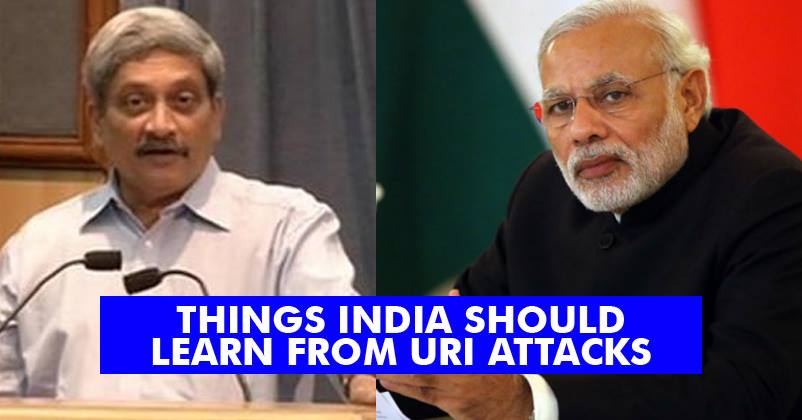 Unfortunate incidents have always hampered India emotionally and economically. The sentiments of people are always the first victims of such terror attacks. Apart from condolences and compensation, what we as a Nation should do is to learn by our mistakes so that we don’t repeat it again in the coming future so as to avoid such attacks.

Manohar Parrikar in his recent interview said, “Something obviously went wrong in Uri”. He said this by stressing that the government will take steps to prevent such attacks from happening again. He also said that he believe in the “principle of zero error” and India needed to ensure “wrongs” are not repeated. Following are some analysis taken from the recent URI attack and I will be pointing out the lessons that we need to learn through them. (Source – WikiPedia).

1. On 18 September Times of India published that the army personnel recovered a map from the slain terrorists which had markings in the Pashtun language and indicated a detailed plan of action. 2. The India Today magazine reported that there was specific intelligence input from the Intelligence Bureau two days earlier that terrorists were planning to strike army formations close to the Line of Control.

Certainly, there was a communication gap between the Intelligence Bureau and Our Indian Army. Had they been more cautious for such a surprise attack, the loss would have been less. Although we can’t miss out the fact that our Intelligence Bureau and Indian Army have together countered a lot of Terror attacks before it actually began. Such is their efficiency, although exceptions are always there and are indeed RARE. There are reasons for the making of such procedures that needs to be strictly followed when it comes to National Security. Following every inch of these procedures are indeed important.

4. The terrorist infiltrated into Indian Territory through Haji Peer Pass on the intervening night of 16-17 September and stayed at Sukhdar village. When it is said that they stayed in Sukhdar Village, this definitely means that they must had some sort of ‘internal help’. Many Army Officers believes that these intruders get the support of the localities which help them to plan out and improvise their attack on many different places throughout our country.

5. After the URI attack, many politicians came up and started their usual political game of declaring ‘COMPENSATION’ for the family of martyrs. They actually started to buy the public sympathy by bidding in the name of giving compensations. 2 LAKHS, 5 LAKHS, 10 LAKHS and 20 Lakhs were some of the bids which according these politicians seemed to justify the priceless life and service of our martyrs.

6. There were Four AK-47 rifles and four under barrel grenade launchers along with Incendiary Ammunition recovered from the terrorists.

This is indeed a heavy weaponry system. Affording such intense arms and ammunitions is not a child’s play. The funding of such purchases must be investigated. Definitely a person or an organization with good finance can only afford to fund such attacks. Who are they ?

What do you think about these lessons. Are there something more that we should be learning. Share them with us in the comment section below.

Are You A Big Dhoni Fan? Avail These Exclusive Products & Flaunt With Style….
Here’s How Akshay Kumar Has Perfectly Taught All Politicians The Value Of Martyrs! RESPECT !