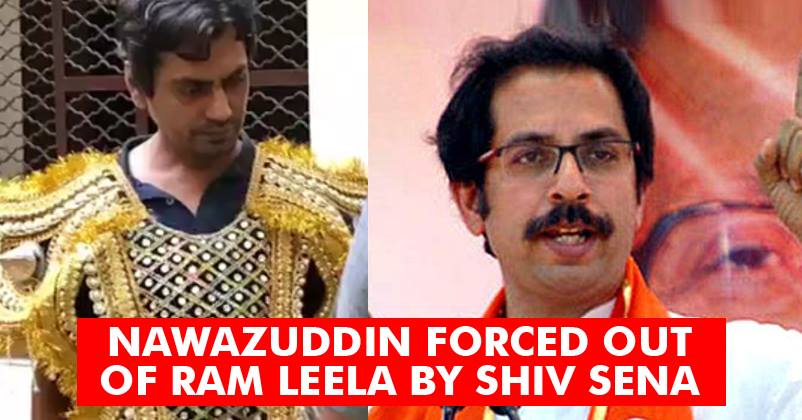 A man’s identity should not be defined by his religion or caste but by his nature. The criteria required to play a character’s role does not depend on a person’s religion but on his capability to do justice with the role. Sadly some people always fail to understand this because of their petty narrow minded mentality. Shiv Sena is not an exception. Somewhere down the line I do agree with the previous statement stated by Shiva Sena for the banning of Pakistani Actors, but they need to understand the fact that Nawazuddin Siddiqui is an Indian Muslim just like the rest of the actors in Bollywood.

Nawazuddin Siddiqui hails from a small village called Budhana in Uttar Pradesh. He was all set to perform in the Ram Leela in front of his home people this year. However to his and our utter disbelief, he is now dropped from performing in the drama. He expressed his disappointment in a positive manner through this tweet.

My childhood dream could not come true, but will definitely be a part of Ramleela next year.
Check the rehearsals. pic.twitter.com/euOYSgsm3F

Shiv Sena came out with a request which apparently forced the producers and directors of Ram Leela community to drop the actor from playing any role in its drama. Shiv Sena district head, Mukesh Sharma approached police and appealed the community to drop him on the basis of his religion which is against the tradition to let a Muslim perform in Ram Leela drama.

“OUR OBJECTION IS WITH HIS NAME AS WELL AS THE PERSON.WE WILL NOT ALLOW THIS. FOR OVER 50 YEARS, NO MUSLIM HAS BEEN A PART OF THE PRODUCTION. WHY SHOULD THIS BE ALLOWED NOW?”, Shiv Sena district head, Mukesh Sharma

Well, if that how the logic works, I wonder what thought did the Britishers give when they first heard the idea of Independence from an Indian. It must have been – “For over many years, India hasn’t had Independence. So why now?”

Nawazuddin Siddiqui was about to play the role of Maarich, the demon who transforms himself into a golden deer and helps Ravana kidnap Sita.

For the first time in the history of my Village "Budhana"@Nawazuddin_S to play the role of "Maarich" in the Local Ramleela pic.twitter.com/Law0YMXlwn

The president of Ram Leela Community in the village, Damodar Prasad Sharma said, “A few members of the Shiv Sena didn’t want a Muslim man to play a character in Ram Leela.”

“THE POLICE TOLD US THAT WE SHOULD NOT LET NAWAZUDDIN PARTICIPATE AND, IF AT ALL WE DO, AND THERE IS A PROBLEM DURING THE SHOW, WE WILL HAVE TO TAKE RESPONSIBILITY. WE WERE NOT READY FOR THAT, THERE WERE JUST TOO MANY PEOPLE IN THE AUDIENCE.”,

I am no one to say what job does our police force need to do, but protecting a citizen’s right to perform, speak and act on a stage is indeed required and expected out of them. Just because some few douchebags are taking offence on a Muslim man for performing an act in Ram Leela, you don’t have give a damn about such people and the ‘problems’ that they are threatening with.

7th Day Collections Of Dhoni’s Biopic Are Out! Captain Cool Has Left Even Akshay Kumar Behind
These Singers Have An Amazing Voice & Have Given BIG HITS But Some Might Not Even Know Them!