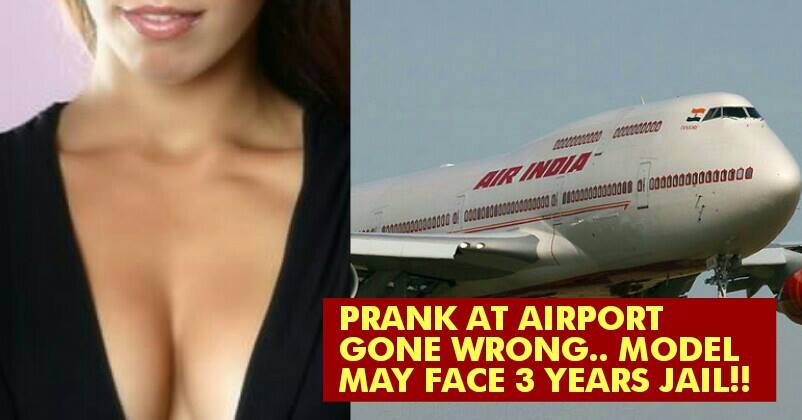 We all love to play pranks on our friends, but there should be a limit. Sometimes, these same pranks might put us in deep trouble, which we would have probably never even imagined. Exactly the same thing happened with this model; one thoughtless prank landed her in a big mess. Yes, one joke has cost her 3 years imprisonment.

Kanchan Thakur (27) was all set to board Air India flight 101 to Delhi, from Mumbai’s Sahar Airport T2, along with her 3 friends and was getting done with all the security checks. After her inspection was over, she thought of having some fun; when her friend came in for a checking, Kanchan told the security guard to check her friend’s handbag carefully as it had a bomb inside. Obviously, there was a lot of chaos after this bomb scare and the security immediately called up the airport officials and CISF. Although it was nothing but a prank, she had to face the wrath. Due to this, not only was the Air India flight was delayed by an hour but even all 4 of them were stranded at the airport.

Her prank proved to be dangerous!

As soon as CISF officials arrived there, they questioned her and offloaded their baggage; after this Kanchan started explaining how it was just a joke and nothing else. The officials were in no mood to listen to her, due to which a heated argument started. After offloading the baggage, the flight left at 10 pm instead of its 9 pm departure.

They were taken to Sahar police station and a complaint was filed against Kanchan, for endangering others’ lives with this bomb hoax.

“At midnight, officials registered a FIR against Thakur. She took the matter lightly and playing a joke on her friends turned serious.”

The charges slapped on her might lead to 3 years of imprisonment; currently, she is out on bail.

“The serious charge of IPC section 505(1)(b), which deals with anyone who makes or circulates a ‘rumour’ intending to cause or which is ‘likely to cause fear or alarm to the public or to any of its section whereby any person may be induced to commit an offence against the state or against public tranquility’ attracts a jail term up to three years.” Even the officials of Air India are in support of this FIR because it was surely wrong on her part to create panic at the airport and scare everyone.

In short this is the best example of a “Wrong prank”! Think carefully before playing such pranks on your friends as you never know what might happen next.

Vodafone, Airtel & Idea Introduce Lucrative Offers In The Rs 350 Range, All Thanks To Jio!
WTF! Man Circulated Adult Clip Of The Girl On Web After She Rejected His Marriage Proposal