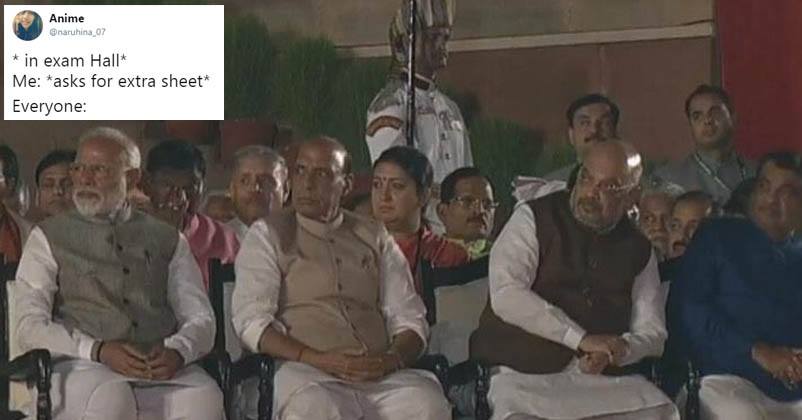 The newly elected ministers of the 17th Lok Sabha Election were sworn in on Thursday. Like always netizens never fail to miss a moment to create memes and they created a popular meme from the very serious swearing-in ceremony.

All the leaders of Bhartiya Janta Party on stage were caught staring at the other side of the dais to watch a minister taking the oath.

The expressions of PM Narendra Modi, Rajnath Singh, Amit Shah, Nitin Gadkari attracted the Twitterati and it was converted into a hilarious meme which one us can relate too.

When the entire school is having recess and your teacher keeps on teaching. pic.twitter.com/NbfCweJT7C

CS guy when a mechanical guy roaming around with a girl pic.twitter.com/9zojCSOgUq

Relatives at wedding when they see unmarried guy talking to a girl. pic.twitter.com/DamDAvK96J

*Students talking to each other*

First row guys are already prepared for viva and waiting for their turn ,other row guys are doing the last mins preparation 😁