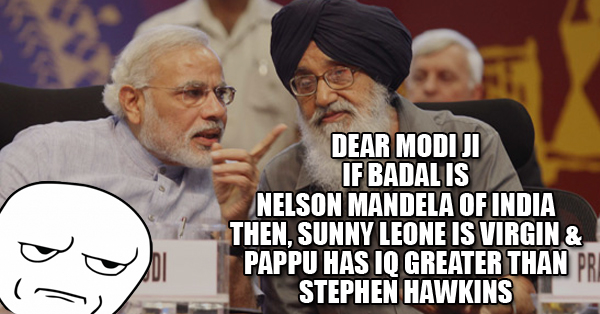 On Sunday, Prime Minister Narendra Modi called Punjab Chief Minister Prakash Singh Badal as the Nelson Mandela of India while he was giving a speech in an event held in order to celebrate the 113th birth anniversary of Jai Prakash Narayan.

PM Modi said, “Badal Sahab is sitting here…he is the Nelson Mandela of India. The only crime of people like Badal Sahib was that they had political views different from those in power.”

Prakash Singh Badal also returned the favor soon by saying that country has brought big change by bringing a new government under the leadership of Mr. Modi as he can fulfill the dreams of our national heroes like JP.

However, this comparison of Badal with Mandela didn’t went well with the twitter users, in fact very soon #YoBadalSoMandela started trending and jokes and funny tweets were posted.

The Chief Minister of Delhi, Arvind Kejriwal was also one of those twitter users who posted their tweets on this comparison along with Capt. Amarinder Singh, the former CM of Punjab.

Here are some tweets which will make you go ROFL:

#YoBadalSoMandela "Who says our PM has no sense of humour. Let's hope, like Mandela, Bharat Ratna/Nobel Prize next for Badal"

Modi:"Badal Sahab sitting here is the Nelson Mandela of India."
#YoBadalSoMandela
Modiji,why are U bent on proving that U are too stupid?

Modi Ji just proved why he is our own Donald Trump. #YoBadalSoMandela

Modiji personally has answered one of the questions as a sample.#YoBadalSoMandela pic.twitter.com/pQZU0zzPUL

Mitron, Bal T ain't here. But he is the Abraham Lincoln of India. Both fought the Southerners. #YoBadalSoMandela pic.twitter.com/q4uGmCNr3H

Badal is Nelson Mandela and Drugs are Nectar #YoBadalSoMandela pic.twitter.com/9DVK83D4M2

What are your views with regard to the article? Share your opinion in the comments section below.