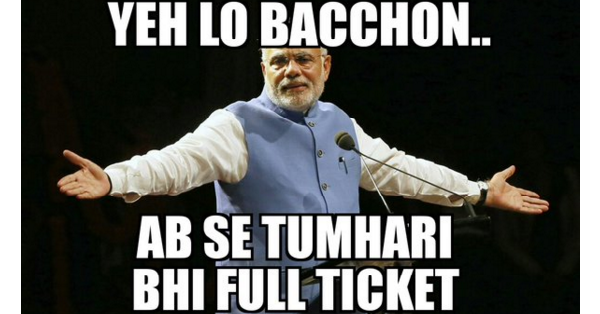 Twitter is once again trolling Indian Prime Minister Narendra Modi and this time his child version is being trolled in the form of #BalNarendraFullTicket.

This is happening as Indian Railways has taken a decision charge full ticket fare for the kids of age between 5-12 from April, 2016. The timing is very crucial as it is taking place before the rail budget and this means there will no hike in ticket fare in the rail budget next year.

The twitter is expressing its outrage over this decision as most of the public is not happy with the increasing rates of necessary food items and now travelling will also become costlier. Not to forget to mention that Indian Railways is the lifeline of Indian public as it is the most suitable mode of transport in terms of prices and facilities that are provided by the railways.

The new rule says that from April, 2016 full adult charge will be charged for the ticket of kids of age between 5-12 years if a seat/berth is taken in the reserved class, however if the seat is not taken than the ticket price will be half of the adult ticket price.

Here are some tweets which were posted under #BalNarendraFullTicket and you just can’t afford to miss them:

Kids to pay in full…bcoz their parents are not working hard enough for saheb's air tickets and nau-lakhiya suits. #BalNarendraFullTicket

Share your views with regard to the article in the comments section below.