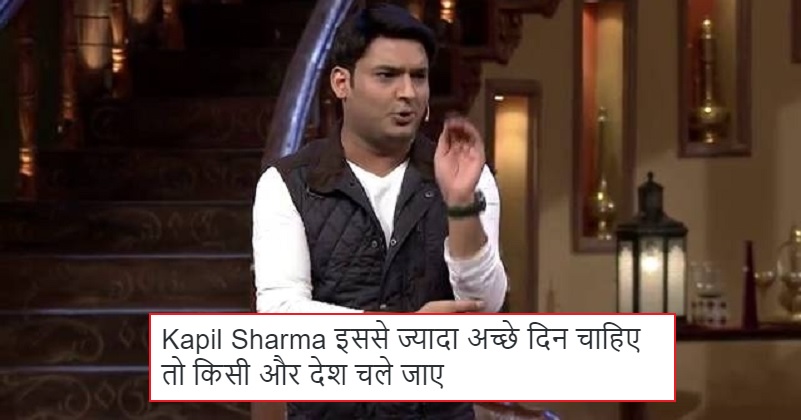 Today morning, Kapil Sharma highlighted the issue of ‘Corruption’ with his tweet, in which he questioned Modiji about where are the so claimed “Achhe Din’. However, this one tweet has put him in deep trouble. Well, what happened was that Kapil Sharma had to pay a bribe of 5 lakhs to BMC, to get permission to set up his office. He tweeted to PM Modi highlighting this situation of corruption in the country.

As soon as Kapil did this, Modi followers started leaving hateful comments for him. Moreover, after seeing this complaint, even Devendra Fadnavis, the CM of Maharashtra replied to his tweet and promised to take strict actions. The CM asked Kapil to give him detailed information about this matter, so that appropriate measures can be taken against culprits.

Now, while investigation on the same is still going on, Modi fans have started slamming Kapil Sharma on Twitter. Yes, they were of the opinion that Kapil Sharma is doing this because he is a big star and wants to do some publicity. It is always seen that as soon as someone points out Modiji, his supporters just lash out .

This were a series of tweets left by Kapil Sharma!

Modiji are you listening?

As soon as he tweeted this, people started lashing out at him; have a look at their tweets….

And there are chutiyas like @KapilSharmaK9
who think just because they pay a little extra Income Tax, they own the country. @narendramodi

Are you trying to join politics?

BMC may be corrupt but can u declare in public that u hv never ever taken cash for Stage Show ?@sushilkarwa @narendramodi

What a stupid comparison!

Is is illegal to tag Modi?

This is very wrong, isn’t it? Kapil Sharma just highlighted a common issue and Modi fans lashed out at him like crazy. Modi fans are abusing Kapil Sharma and I don’t think even our PM Modi will like this! Be sensible; Kapil has pointed an issue of corruption which is there in our country since ages; it is right time to address this issue. So what do you think about this guys? Do let us know your thoughts in our comments section below!

Here’s The Evolution Of Royal Enfield Since 1893.!!
8 Out Of Top 10 Apps In Android Market Are Owned By JIO Now! Have A Look