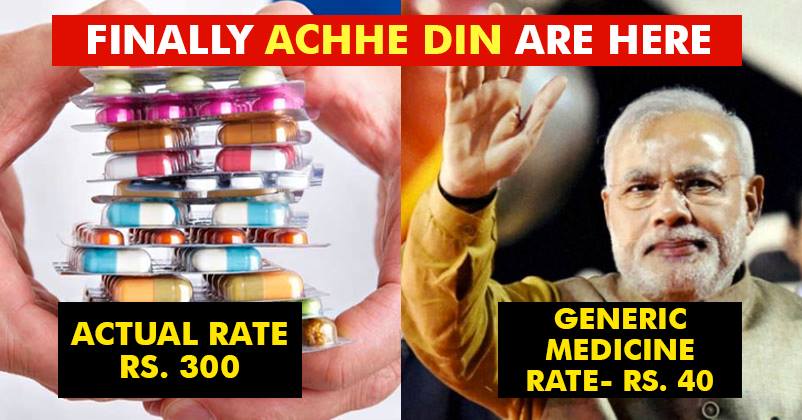 We know that Prime Minister Narendra Modi has announced that doctors will have to prescribe generic medicines instead of the expensive branded ones.

As advertising of medicines is prohibited in our country, big brands try to push their medicines in alliance with chemists and doctors. So often doctors prescribe us some expensive branded medicines which are often difficult for poor/lower class people to afford. There are generic medicines which are equally efficient but we don’t buy them due to lack of knowledge. We believe in the brand that our doctors recommend.

The government will soon come out with a mandatory code of marketing practices so that it is assured the rule of prescribing generic medicines is followed. The code of marketing is like directives to pharmacists and doctors which they have to follow else they will be subject to punishment.

If the code is violated, there will penalties that can be either just a warning or something more serious like the cancellation of license. It all depends on how serious is the offense. The government mentions that multiple laws can be stated to punish the one who committed the offense.

Health Ministry has already asked the MCI to make sure the order issued in October is enforced and it is made mandatory for doctors to prescribe generic medicines in legible handwriting.

For instance, when we talk about the drug “Cetrizine”, the cost of branded one is Rs 35 while the generic one costs around Rs 25; likewise the rates of different medicines will vary.

“We have asked MCI to ensure that doctors who are not doing so are punished under the law.” The marketing code aims at making the chains of drug supplier more strong on the grounds of accountability. The chain includes the pharmaceutical companies, retailers, distributors, and doctors. The marketing code has been given approval by the department of pharmaceuticals (DoP). The code is being critically examined by the law ministry.

Modi has already declared on Monday on how the government is trying to bring a legal framework under which doctors will have to prescribe generic medicines which are low cost and affordable to patients.

This decision marks as an important one since this will bring in a major relief to the affordability of better health especially for people from the lower economic strata. So far the marketing code is voluntary which is applicable to pharmacy industry. After its binding, the violation of the code will be punishable and there will be a penalty under the Essential Commodities Act, the Indian Medical Council Act as well as Drugs and Cosmetics Act.

All stakeholders will be legally bound by an executive order by The Uniform Code of Pharmaceutical Marketing Practices (UCPMP). DoP secretary J P Prakash told TOI,

“Once the law ministry approves the code, there will be a final round of public comments on the draft before issuance of the final gazette notification.”

Department of pharmaceuticals (DoP) has already made the necessary consultations with the health ministry and Medical Council of India.

Not just DoP or the health ministry, even the central drug regulator bodies like Drugs Controller General of India, the National Pharmaceutical Pricing Authority (NPPA) and the Medical Council of India have been given the responsibility to strengthen and work on different laws to make sure that consumers can make their choice after proper knowledge of the medicine. The body is also trying its best to make it easy for the consumers to differentiate between the branded and generic medicines.

State drug regulators have also been ordered to grant manufacturing licenses to the companies that are based on generic names of the products than brands. This is a major step in promoting generic drugs.

If we go into the stats, estimates show that 70% of over 1 lakh crore domestic pharmaceutical market is purely under the domination of branded generic drug while only 9% belongs to patented drugs.

This step is very important as most of the household’s out of pocket expenditure comprises of 70-75% spent on medicines and healthcare.

Guy Wanted To Stop GF From Going On Trip! Sends Fake Hijack Email & Gets Arrested!
Woman Ran Into UP Police Station For Protection But Shot Dead In Front Of Police Officers!