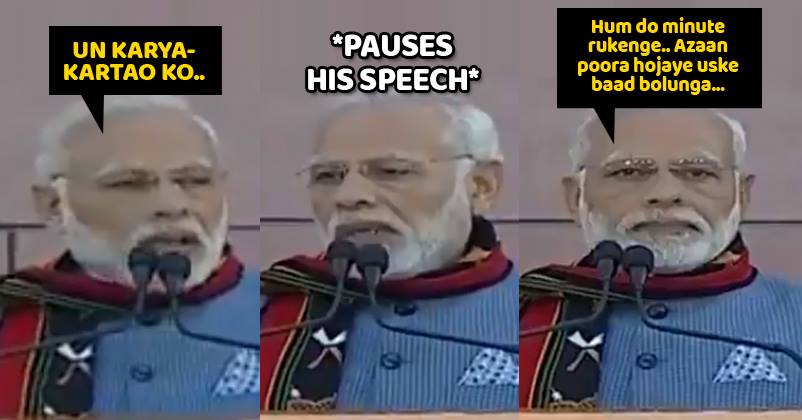 We get to see PM Modi’s sweet gestures every now and then. Even yesterday, he won hearts of one and all. Yes, we felt like applauding him when he paused BJP party’s victory speech, as soon as he heard the Azaan.

Modi was addressing the people at headquarters in Delhi & was talking about BJP Party’s victory in Tripura. However, as soon as he heard the Muslim call for prayer, he paused his speech immediately.

The call for Maghreb Azaan is given at dusk & even though he had just started the speech, he didn’t hesitate to pause it.

Modi also informed everyone present there about the Azaan. For 2 minutes, there was complete silence. When the Azaan got over, Modi again chanted, “Bharat Mata Ki Jai”; everyone was enthusiastic to join him in this.

Earlier too, we have got to see this gesture from PM Modi. When he was addressing in Navsari in 2016, we had witnessed the same thing.

Talking about this, Modi said, “Do not want to interrupt anyone’s prayers. So I decided to take a brief rest.” He even observed 2 minutes of silence for all those BJP workers who were killed in political violence in Tripura.

Here’s the video of that Azaan;

We loved the way Modi respected the Azaan and asked everyone to wait till it’s over.

Trump Makes Fun Of Modi. Calls Him A “Fantastic Man” & Trolls Him Like Never Before
Punjab CM Amarinder Singh Angry On PM Narendra Modi. Scolds Him Openly On Twitter