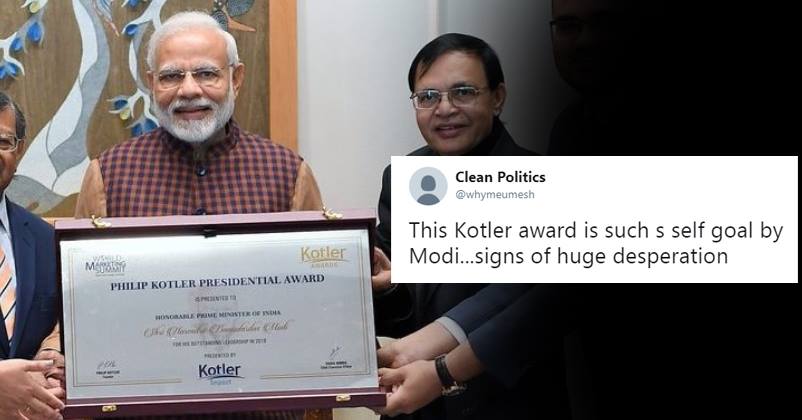 But, surprisingly this award holds no previous record of existence and explanations are avoided by saying that it is a confidential award. Even when the news broke out there was no jury members or even organisations to explain the nature of it.

Through social media we can even see BJP leaders such as Chief Minister of Manipur N. Biren Singh, Union Ministers Smriti Irani and Piyush Goyal and even former ministers like Vasundhara Raje, Raman Singh congratulating him.

In Goyal’s list of tweets, we can see the individual countries who bestowed the prestigious awards on five people for their achievement, whereas this newly occurring award holds no such credibility.

Sure the nation wants to know why and how this award was selected to be awarded. See what twitter has to say.

This Kotler award is such s self goal by Modi…signs of huge desperation https://t.co/Ax8e7FjJc4

Hmm… Philip Kotler endorses PM Modi for being “selected” for the Kotler Presidential Award. Jagdish Sheth who presented the award said there was “no jury” & it was decided by Kotler himself. What kind of “selection” is this? 🤔🤔 pic.twitter.com/Vkj9ia439W

Don’t know if Modi got anything from Philip Kotler Award but Kotler has gained much.

2. He has learnt the technique of writing a thread. After writing individual tweets apparently somebody taught him.

Fail to see the fuss over the @kotl award to PM @narendramodi .. Kotler is a global guru in marketing and Mr Modi is a master in political marketing. Surely a well deserved award?

Narendra Modi with the guy who introduced the first ever Philip Kotler award. pic.twitter.com/2vU0js31rK

So @narendramodi wins a ‘first-ever’ award and his ministers are quick to jump in to say it’s a proud moment for Indians. But what is this award? The person who gave it refuses to share details. Says it’s a ‘very confidential award.’
https://t.co/hVpJ9MQ4qV

After Modi won the 1st ever Philip Kotler presidential award , another proud moment for India as Arnab Goswami is likely to win the first ever JBL Speaker loudmouth award.

Back in school days, whenever I used to perform bad, I used to create a story and tell my parents that teacher gave me an award for some co-curricular activity.

In another news, Modi ji has received first ever Philip Kotler Presidential Award by an unknown jury.

You surely cannot miss what Rahul Gandhi has to say on this too.

I want to congratulate our PM, on winning the world famous “Kotler Presidential Award”!

In fact it's so famous it has no jury, has never been given out before & is backed by an unheard of Aligarh company.

But, amid all the speculations about this award, Philip Kotler, the world famous marketing tycoon himself congratulated Prime Minister Narendra Modi on his achievement.

He even clarified that PM Modi is the most deserving and to honor his selfless service, he asked his Marketing Professor Jagdish Sheth to present the award on his behalf.

Check out the tweets below.

I was involved in a misunderstanding with the Indian media. Confusion over the award presented to India's PM @narendramodi by my friend Jag Sheth and The World Marketing Summit. Here's my @marketingjour interview to clear up the confusion: https://t.co/rHmnv86QU2

2/2 @narendramodi's efforts have resulted in extraordinary economic, social and technological advances in India. His winning the first award raises the bar for future recipients.

I congratulate PM @narendramodi for being conferred the first ever Philip Kotler Presidential Award. He has been selected for his outstanding leadership & selfless service towards India, combined with his tireless energy. (1/2)

So, what is your opinion regarding this?

Continue Reading
You may also like...
Related Topics:PM Modi