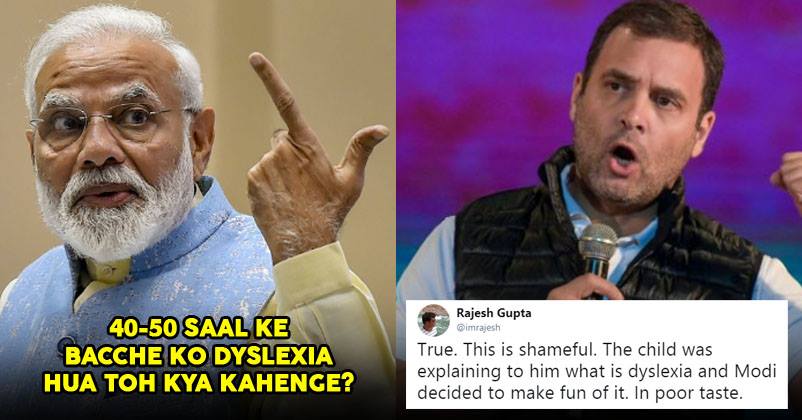 Now a days we often tend to find politics as a social medium of propaganda where urging the display of self power is quite common. As elections drew near we find politicians taking digs at one another to attract people’s attention.

Amidst every political campaign and meetings and conferences, making fun of rival party leaders have become one of the most common strategy. We can easily find the political parties trolling each other, they leave no opportunity to do so. The same goes for our Prime Minister Narendra Modi and Congress President Rahul Gandhi.

We have seen many occasions where Rahul Gandhi trolled PM Modi. He shared a picture of Modi’s lookalike, he even hugged him during a Lok Sabha session and very recently accused him of delaying the Rafael Deal, which resulted the IAF using old jets.

There during the live interactive session a student was explaining to our Prime Minister that how she is working for dyslexia patients who has trouble while reading and writing though they are very intelligent and creative. To this he took a jibe at Rahul Gandhi and hinted he maybe is suffering from dyslexia, which if gets better will make his mother very happy.

This comment was not very well received by the people. It is insensitive and a shameful act displayed by our PM, is what the comments read for itself. Humans who are suffering is strong enough to embrace it by bravely fighting with it. It takes courage and respect to see this.

Parents of dyslexia children may be fuming at this man’s insensitivity and his obsession with @RahulGandhi. Don’t have words to describe what sort of PM we have

This is shameful conduct by PM in front of students.

@PMOIndia @narendramodi modi hello… pls learn first.. and u can t make fun out of any humans.. 😡😡 A learning disorder characterised by difficulty reading.
Learn more at https://t.co/vFB9tfonhL

True. This is shameful. The child was explaining to him what is dyslexia and Modi decided to make fun of it. In poor taste.

Dyslexia is no joke..
Ignorant Modi

Sorry this is not the India or the new India I want to be in.
Where the PM makes fun of dyslexia just to target the opposition. Shame on you Modi. https://t.co/8ivCyMkw6k

A Prime Minister mocking dyslexia is nothing short of insensitive and shameful. Nothing funny or 'savage' in it.

So, what are your views on this matter?

After Pakistan Released The IAF Pilot, Pakistanis Are Demanding Nobel Peace Prize For Imran Khan
Did Pak Government Contact The JeM Leader? Here’s What Their Foreign Minister Had To Say.