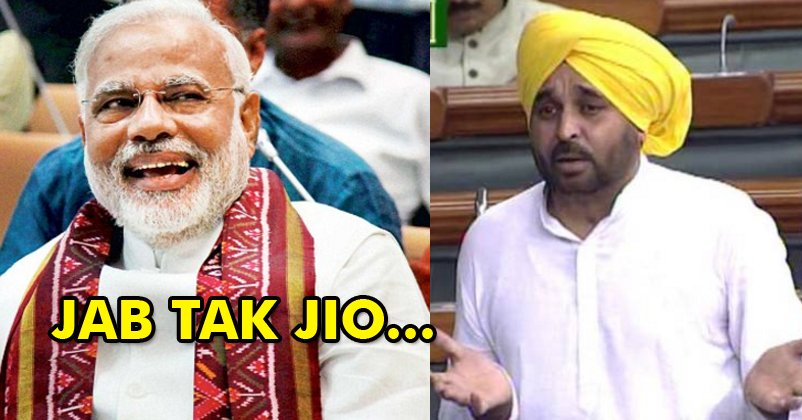 On Tuesday, while addressing Lok Sabha, Indian Prime Minister Narendra Modi took a jibe at the opposition and silenced all his critics. The opposition are trying their best to corner government over the issues of demonetization and on-going elections.

Bhagwant Mann, who has been a critic of PM Modi, always taking jibs at Modi in his rallies. Mann gave an amazing speech in the parliament. After Mann’s speech, when it was the turn of the Prime Minister, he trolled the AAP MLA Mann in his trademark style. He borrowed lines from a Charwaha poem, Modi said: Jab tak jio mauj karo (while you are alive, have fun), karj karo aur ghee piyo (take debts and drink as much ghee as you want).

But that’s not all, Modi went further and said, what if in today’s times, If Bhagwant was to offer this advice to someone. He would say,

“he would have said drink something else.”

AAP leader Bhagwant Mann was not happy about this personal remark. It should be noted that earlier Mann’s colleague Harinder Singh Khalsa has accused Bhagwant of showing up in a drunk state in Parliament. Mann attributed Modi’s insulting remark at him to the Prime Minister’s “frustration” and “nervousness”!

PM Modi knows that winning Punjab will be AAPs gateway to India that's why he personally commented on me in the parliament: @BhagwantMann pic.twitter.com/333kZZRXnq

Mann was upset with the personal dig at him, he hit back at PM Narendra Modi for making such a remark. He said that PM Modi has “lowered” the dignity of Parliament and the post of the prime minister. Mann said that the “personal comments” of Modi against him were reflective of the nervousness of the BJP as AAP is all set to conquer Punjab and Goa. And Modi’s personal attack against him is an acceptance of BJP’s defeat in Punjab.

Airtel Takes The Legal Battle Against Jio A Step Further! This Time Complaints To CCI For This Reason!
Mahira Khan Takes A U-Turn, Now Says She Has Always Been A Bollywood Fan!