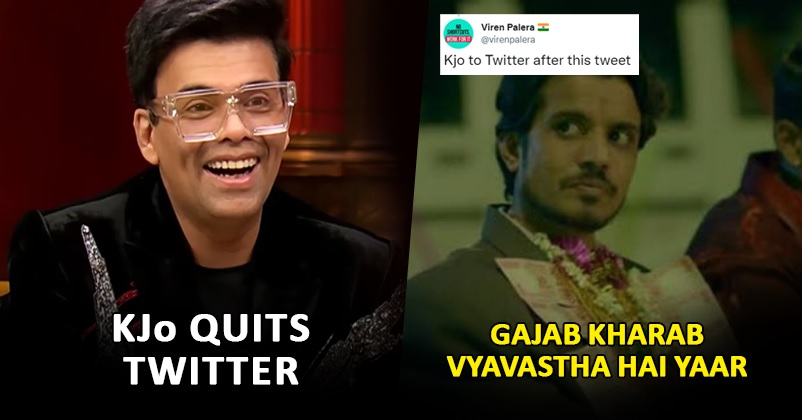 Karan Johar, the famous producer-director, is quite accustomed to trolling but recently the intensity of trolling got huge especially after the release of Ranbir Kapoor and Alia Bhatt starrer “Brahmastra”. KJo is the producer of the movie and a section of society called for the boycott of this flick as a result of which many tweets were made in regard to the campaign targeting KJo and the lead actors of “Brahmastra”.

Today, Karan Johar decided to bid goodbye to Twitter in an attempt to make space for more positive energies and this did not go well with many netizens who trolled him once again. Some of them stated that Twitter would have more positive energy after he left and there were also few who even suggested him to quit Dharma Productions and Bollywood. Several others accused him of spreading news of fake collections of “Brahmastra” because many people posted photos of empty cinema halls where the movie was shown but the makers claim that the film is a big hit and earned huge on box-office.

He himself has to go so rest of the people get positive energy.

It has been reported that After the epic flop of #Brahmastra movie, @karanjohar decided to step down as Producer and decided to quit Twitter #karanjohar

What a major loss to world!
To show support to #KaranJohar , #Russia and #Ukraine will halt their military exercise. 🤧

Karan Johar will be back as director in the movie “Rocky Aur Rani Ki Prem Kahani” which will release in Feb 2023. It stars Alia Bhatt and Ranveer Singh in the lead roles plus veteran actors Dharmendra, Jaya Bachchan and Shabana Azmi will also play important roles in the flick.