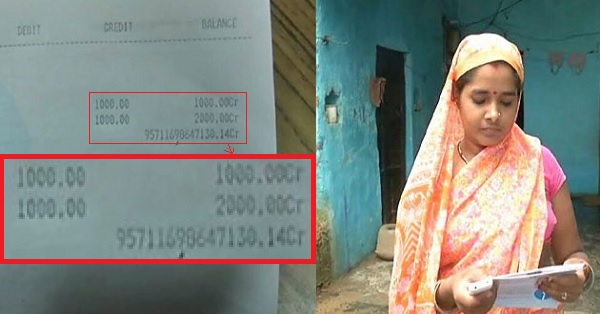 State Bank Of India is quite a well-known bank and there is absolutely no denying this fact. However, it’s really a thing of disgrace on its part that despite being so reputed, it has committed a blunder for which it might have to face drastic and deadly consequences!!

If we call it the bank’s most epic mistake so far, it won’t be wrong at all too. An extremely shocking incident took place with a lady of Kanpur, UP named Urmila Yadav whose SBI account had been credited with INR 95,000 crores!! CAN YOU BELIEVE Rs. 95,000 CRORES?? SHOCKING!!

Obviously, it made Urmila unnerved, as the lady deposited only INR 2,000 for opening her account in the bank.

She was completely baffled and in a perplexed condition hurried to Lalta Prasad Tiwari, the guarantor, who finally went to SBI. It was quite shocking for the bank too, so a surprising reaction from its side was natural.

If we refer to the bank, there was not enough balance in Urmila’s account so SBI took the decision of transferring a ‘fictitious’ amount. Nevertheless, it’s creditable on the part of honest Urmila that she doesn’t wish for it to be a controversial issue and what all she wants is her money back.

The matter is now sorted and all doubts cleared!!

Twin Brother Of VIRAT KOHLI Found In Pakistan… Internet Goes Crazy!!
These Muslim Bhakts Of Bajrang Bali Have Won The Internet For All Right Reasons