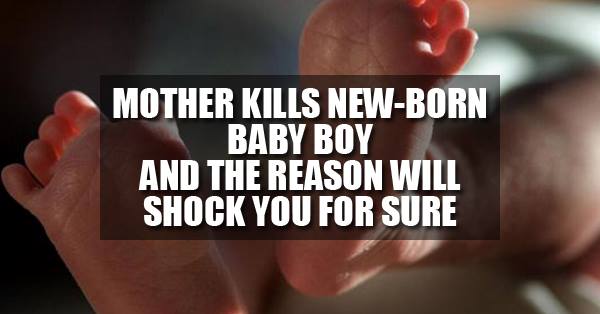 We have heard a lot about female infanticide but a lady in Neredmet, Hyderbad has killed her own 24 days old son as she wanted to have a girl.

Purnima (30), wanted to give birth to a girl but her first child was a stillborn boy, her second baby was also a boy and now after five years she was very hopeful of delivering a baby girl but it was again a boy. She was so upset with the birth of the boy that she asked her husband to give him to a couple who doesn’t have kids or to anyone in relation. However, when the family refused to fulfill her wish to give away the boy, she went into depression which ultimately led to the murder of boy on Tuesday.

On Tuesday night, Purnima called her husband Sridhar Raju, a cosmetics shop owner, and told him that the baby got injured after robbers attacked him and they also took her gold “mangalsutra.”

Syed Rafeeq, Alwal assistant commissioner of police told that when Sridhar reached the location which was just a kilometer far from his house, Purnima said to him, “Two bike-borne thieves sprayed something on my face. I fell unconscious and when I regained my senses, my mangalsutra was missing and the boy lying on the street.” Sridhar admitted the boy in Suraksha Hospital in Tarnaka as there was a cut on his throat but the doctors referred him to the Gandhi hospital, where he was pronounced dead.

The Neredmet police was not convinced with the statement of Purnima and found her behavior strange. Another police officer told, “She did not cry at all. There was no blood on the road where she said the incident happened. After the post-mortem, the forensic expert said the injury on the boy’s throat was caused by a sharp-edged weapon. So we grilled Purnima further on Wednesday afternoon.”

Purnima has been booked under the charge of murder.