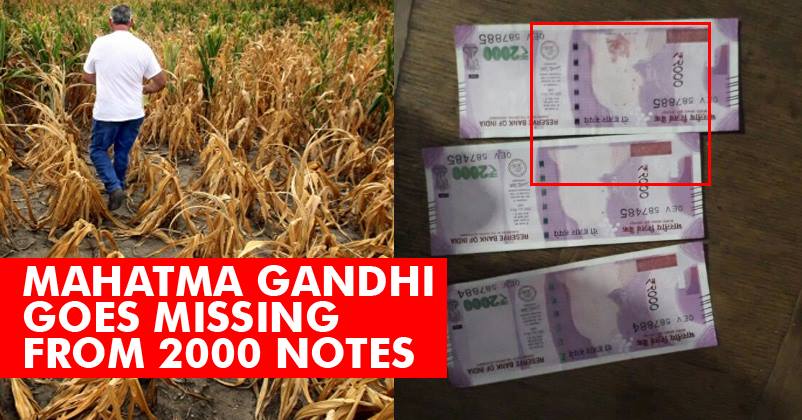 Demonetization has resulted in many shocking incidents and one of them took place just recently when the farmers of a small and distant village in MP got some unique notes of Rs. 2,000 and that too, from a bank. There was no image of Mahatama Gandhi on these notes which is, needless to say, one of the most important features of Indian currency. This incident took place on Tuesday, in Bicchugavdi village which is situated in Sheopur district.

As per a report published in TOI, a local farmer, Krishna Meena, got these faulty currency notes from a branch of State Bank of India and when he tried to make a transaction using these notes in the market, he was alarmed by another farmer who also had such faulty notes. They went back to the bank thinking that the notes were fake; the bank employees told them that the notes were ‘genuine’ but faulty due to printing error. As per NewsX, the faulty notes were taken back by the bank.

It is not fake currency, it is a misprint; sent it for probe: RK Jain, SBI officer on Rs 2000 notes without Mahatma Gandhi's image pic.twitter.com/PiXAlMI5vP

Later on, it was found that these notes had been printed at Bank Note Press which is situated in Dewas, MP.

Soon, Twitterati also started expressing their opinion over the matter and here are some selected tweets:

Gandhi is on the way to the new era Dandi march…

@HoeZaay let's excuse Gandhi, he maybe on his way to the new era Dandi march. Next great civil disobedience movement. 😄

A jibe at PM Modi & #demonetization:

Seems @mahatam_Gandhi also is not happy with @narendramodi on #DeMonetisation

This was the main aim of demonetization… now slowly they want to erase gandhian history..from here they started new debate to do

wont be surprised if Godse appears in Gandhi's place. This govt is nothing but a bunch of incompetent idiots who got lucky!

check if these notes have Lotus on other side

This what happens when you keep gandhi next to rahul. Shame

Just to recall, RBI had already accepted the fact that there were some printing mistakes in the newly issued notes of Rs. 500 because of which two versions are in circulation, however both of them are valid.