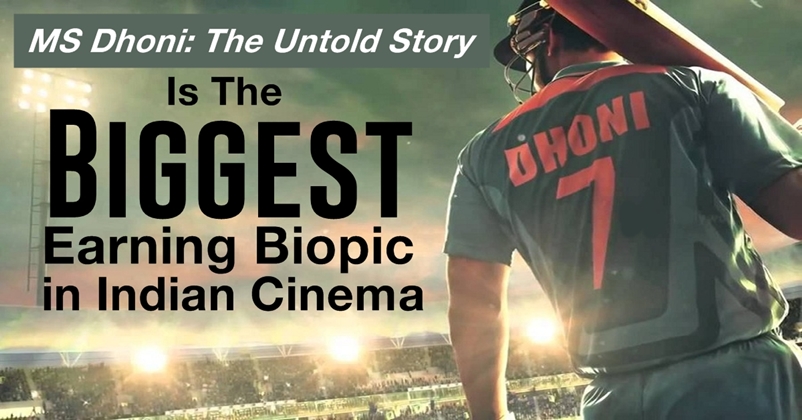 MS Dhoni – The Untold Story, a film based on the life of Indian cricketer and the current ODI and T20I captain of the Indian national cricket team, Mahendra Singh Dhoni. It shows the life of Dhoni from a young age and the series of life events that finally culminates to his stardom in the realm of cricket.

The film is directed by Neeraj Pandey, produced by Fox Star Studios and Arun Pandey of Inspired Entertainment. It follows Dhoni’s journey from a budding cricketer from Ranchi who becomes the captain of the Indian cricket team and creates history. Since its release on 30th September, this MS Dhoni biopic has minted over Rs 116 crore! The makers of the film have claimed that the movie has become the highest earning biopic in Indian cinema. It collected Rs 3.40 crore on Monday (October 10), Tue 4.21 cr (Dussehra) taking the overall total to Rs 116.91 crore.

The CEO of Fox Star Studios, Vijay Singh, said in a statement

MS Dhoni – The Untold Story is now the highest earning biopic ever made in Indian Cinema. This goes to show the love people have for Mahi and how they have been discovered, adopted and promoted the film. We are truly humbled with the response from hs fans, cricket lovers and movie audiences alike. Despite the big releases like Mirzya and Tutak Tutak Tutiya, MS Dhoni – The Untold Story is doing pretty well. Even the demand for the shows have increased. This MS Dhoni biopic stars Sushant Singh Rajput in the title role, and also stars Kiara Advani, Disha Patani and Anupam Kher in supporting roles. The film received mixed reviews, but the critics applauded the performance of the lead actor Sushant Singh Rajput as MS Dhoni. The film has gone on to become both director Neeraj Pandey and its lead actor’s biggest hit.

Shah Rukh’s ASK SRK Session Broke The Internet! You’ll Be Surprised To See His Quirky Replies.
Mouni Recently Uploaded S3xy Pics On Instagram! They Are ‘KILLING’ & Too Hot To Handle…