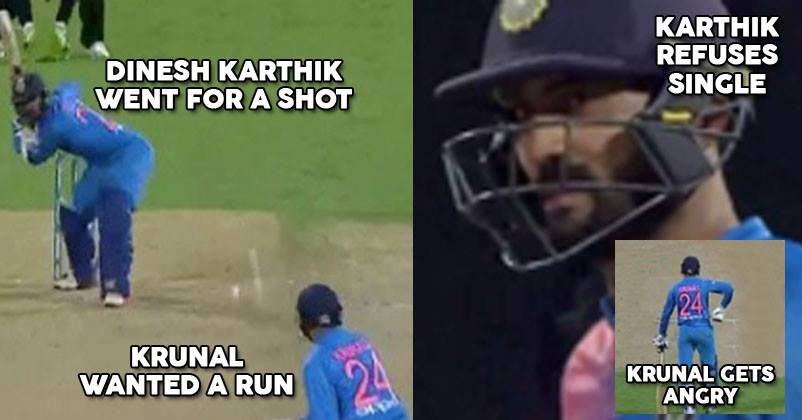 During the ongoing T20 against New Zealand, Dinesh Karthik had a crucial role to play. After the victory he brought for team India in the T20 against Bangladesh with a last ball six, we had great expectations.

He battled powerfully along with Krunal Pndya on the field scoring 52 with 22 balls. They lost the top order and was left to score 68 runs in 28 balls. It required hard hitting but Karthik refused to take a single even though Krunal himself connected the ball well with 25 from just 12 balls. 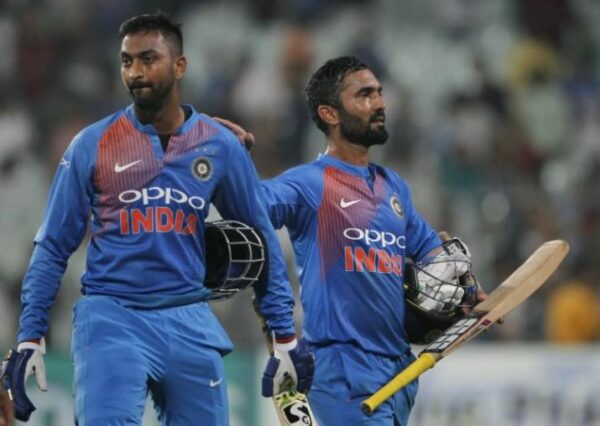 This eventually lead to the series ending with 1-2 as team India lost just by four runs.

This is what Mumbai Indians tweeted after Dinesh Karthik refused a single to Krunal Pandya.

But, twitter users have different opinions. They collectively slammed Mumbai Indians for making an conscious effort to play divide and rule between Indian players. They were all for Dinesh Karthik and appreciated his excellent efforts on field.

What about match loosing bowling figures by KP???

He gave 54 runs with the ball and Rohit consumed so many balls. Highlight that as well 😂🤣😜

Sad we lost, but happy that our boys didn't gave up til the end.. fought their ass off and did their best. Whatever result we had but admit it KP , @DineshKarthik won our heart❤️😇 #ThankYouTeamIndia

What the hell ? How could u b assure that krunal was all about to Finish the match ? DK also was on 33 on just 16 balls nd both were playing for country not for any Ch**tiya Ipl franchise like you. Yes this lose hurt us but thats okay it was just a Match #NZvInd Jai Hind 🇮🇳🇮🇳

This post is completely unexpected. u are clearly pointing on Dinesh Karthik. Whatever happened, This is team game. u can't be that much choosy about your player. Lost the respect.

what about the 54 humongous runs that he gave? 😂

You're subtly blaming DK I guess… @msdhoni and @SDhawan25 should have hit some more runs, it would have been easy for the pair…

If Rohit Sharma had consumed fewer balls,may be KP might have got few more in the end…Just saying

The main reason is India lost the match is not @DineshKarthik during the 18.5 the @krunalpandya24 as hit a boundary India definitely won the match for the first time @ImRo45 lost the series so please stop scroll the Indian players due to over lackconfidence on @mipaltan squad🤔

Why are you digging on Dinesh Karthik

They are indian first, Not Mumbai Indian first.
So stop dividing based on club. Its a indian team

I think that ball which @DineshKarthik left as wide, if he had hit that too it was different story n I don't think he did anything wrong

We all know what Krunal did in Australia T20 when DK took single and gave him strike, he wasted two deliveries and got out for the next ball😂😂😊

During IndVsNZ, Hardik Pandya Again Got Trolled Over ‘Aaj Karke Aaya’ Comment In The Most Epic Way
England’s Joe Root Lashes Out At Shannon Gabriel, Says There’s Nothing Wrong In Being Gay