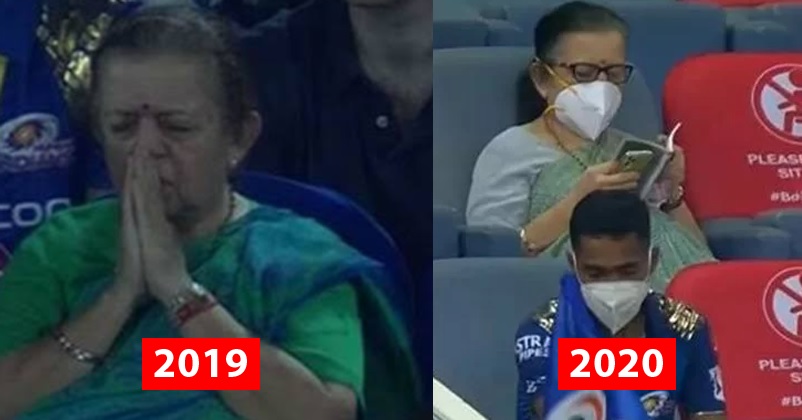 Mumbai Indians started the IPL 2020 as the defending champions and they certainly played the tournament as champions. The team was at the top of the points table in the league round with 9 wins in the 14 matches and now they have entered the finals after defeating Delhi Capitals in the Qualifier 1. 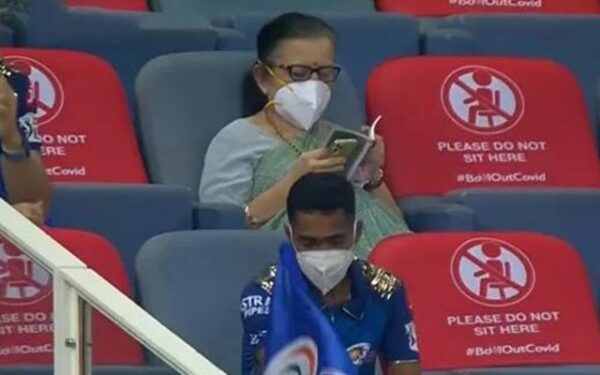 However, one thing that attracted everybody’s attention other than superb batting of MI and lethal bowling of Jasprit Bumrah was the prayer aunty who prays for MI. Prayer aunty was seen in the stands reading a book during the match, the cameraman focused on the old woman who is known as the lucky charm of MI and soon Twitterati showered praises on her for supporting her team even in Dubai.

She was noticed first time in the finale between Mumbai Indians and Rising Pune Supergiant in the IPL 2017. In that match, Pune had a good chance to win as they needed only seven runs in five deliveries and at that time, she closed her eyes and kept on praying. She didn’t watch the match but kept on praying and ultimately, MI won the match. Every MI follower became a fan of the prayer aunty and thanked her for the prayer she made for the team. 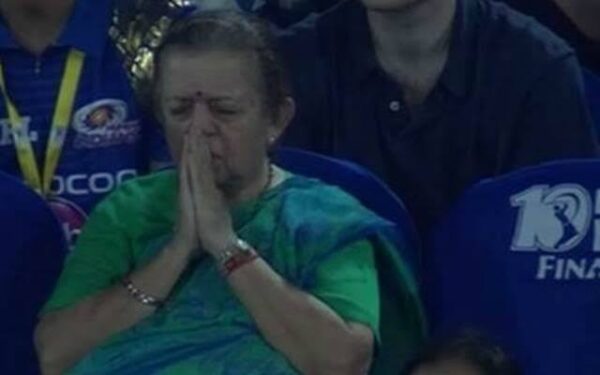 After some time, Bollywood actor Abhishek Bachchan revealed that the prayer aunty is the mother of Nita Ambani, the owner of MI, and mother-in-law of business tycoon Mukesh Ambani. Her name is Purnima Dalal but people also call her “Nani” out of love.

She was back in the stadium for the Qualifier 1 and her presence made fans crazy. This is how netizens reacted on social media networks:

Prayer Aunty is in the stadium. Let's see who is gonna stop us from winning the title this time 😎😎

Prayer aunty seen in the stands….mumbai is winning for sure🔥#MIvsDC

Omg prayer aunty is in the stands today! 😲 #MIvDC pic.twitter.com/aLKYvZbNdJ

As far as the match is concerned, Mumbai Indians was invited to bat first after Delhi Capitals won the toss. Though the skipper Rohit Sharma was out for duck, Quinton De Kock (40) stabilized the innings with Suryakumar Yadav (51) who once again proved his worth for the team. Ishan Kishan also played a brilliant innings of 55 and Hardik Pandya ensured that his team reached the 200 mark by hitting a quick 37 for which he played only 14 balls. 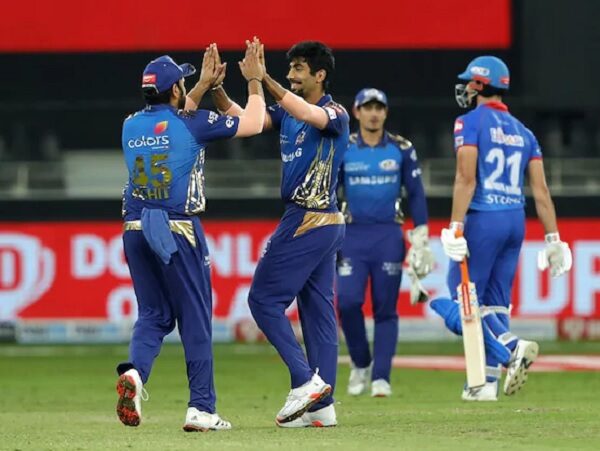 DC had a pretty bad start as their three top order batsmen – Prithvi Shaw, Shikhar Dhawan and Ajinkya Rahane went for duck. The skipper Shreyas Iyer also failed in saving his team as he got out for just 12 and only Marcus Stoinis (65) and Axar Patel (42) showed some resistance against the MI bowlers. MI won the match by 57 runs as DC managed to score only 143 runs at the loss of 8 wickets in 20 overs. Jasprit Bumrah was adjudged as the player of the match for his destructive bowling (4/14).

Royal Challengers Bangalore (RCB) and Sunrisers Hyderabad (SRH) will be facing each other in the eliminator today. So which team are you supporting?

Sourav Ganguly Heaps Praises On Suryakumar Yadav, Says “His Time Will Come”
ECB Took A Jibe At Virat Kohli On His Birthday By Posting This Video, Got Mercilessly Slammed