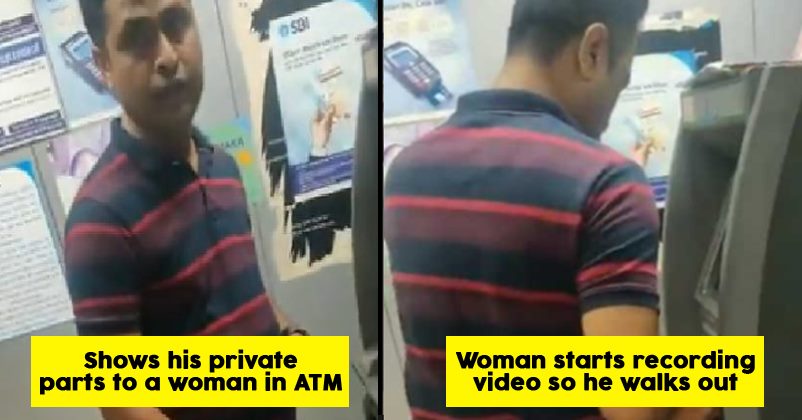 A video of a man flashing his private parts and making vulgar gestures towards a girl in an ATM recently went viral. The incident took place in Mumbai when a woman visited a nearby ATM and she faced this lewd incident without much further ado she captured the man on camera.

The video was posted by a girl named Shibani on twitter where she shared the horrendous experience she had to face in the middle of the night. Shibani is extremely brave and without panicking, she did what she could do the best to teach the man a lesson of a lifetime.

As in today’s date, the internet and mobile phones are two of the most deadly combination it can make anyone or break anyone.

According to the post posted by Shibani on twitter, the obscene incident happened in her locality around 3 am when she went to the nearby ATM to withdraw money to pay her rickshaw wala bhaiya.

This is what happened: Last night, I was coming home from bandra after a gig and I stopped the rickshaw at an ATM near my house. I enter the ATM and I'm frustrated when the machine won't dispense money. This is the first time when the man (Sandeep Khumbharkar) enters the ATM and asks if I need help or want him to pay for the ride. I politely decline saying that I'll manage. Once I exit the ATM, I get into an argument with the rickshaw guy with regards to how I'll be paying him the fare. This is when a cop car pulls up and I explain my situation to them. 5-10 mins after talking to the cops, I say that I'll give the ATM another try. I'm once again at the ATM trying to withdraw money. And the man enters the ATM once again. But this time, he moves in closer and touches my shoulder and thigh, again asking if I need help. I instantly back off and yell at him to stay away from me and that I don't need his help. I go back to trying to withdraw money again, and he's still there. When I hear him, he's calling out to me and blatantly asking me to look at his hard dick that he had pulled out of his denim's zipper area. I quietly start my video recorder and turn the camera right at him. That's when he freaks out and runs out of the ATM. I run to the cop car and show them the video. They instantly start following the guy who has fled on his scooter. So today morning, I go the police station and they have already informed me that they have the guy in custody. He's crying and pleading. But I knew I had to take action against him. So along with my dad, I filed an FIR against him. He claimed to be drunk at the time, which does not exuse his actions at all. What he did, was scary and terrifying. This was a locality wherein I felt safe. But he has ruined it for me. I can't walk the streets feeling the same sense of safety. AND THIS IS MY HOME! I will be giving my official statement to the judge in the coming week and I plan on taking this man to court and make him pay for the way he made feel. What's baffling is that he felt it was okay to flash his dick in a place full of cameras. (Continued in comments)


It was Shibani’s birthday as she went to the ATM, the man was offering to help Shibani and started to touch her irrelevantly. Well, things got more worst as the creepy man unzipped his pants and started flashing his penis towards her. Shibani started recording the lewd gestures of the man and as soon as he noticed the camera flashing towards him he stopped and started covering himself.

It was my birthday, and this is what happens I've always felt that my locality was safe, apparently not.
Please share this. #metoo #violence #scary #abuse #atm @ThaneCityPolice @CPMumbaiPolice

panicked. Luckily there was a cop car, and I showed them the video and they followed him. I don't know if they caught him, but this experience was so scary. It's sick that a man felt that it was okay to flash me inside an atm where there are cameras! When is it going to stop?

When Shibani stepped out of the ATM she luckily spotted a police van. She approached them and showed them the video. She later announced that the molester was arrested by Mumbai Police.

Update: He has been caught and an FIR has been filed against him. Thank you everyone for such kind words and support. And thank you @MumbaiPolice for taking immediate action. 🙂
I really hope no one ever has to feel unsafe in a place they call home.