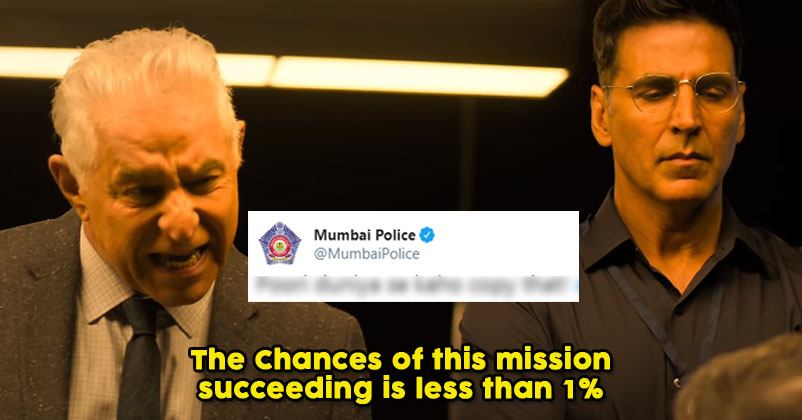 There are a huge number of meme artists on the social media networks and they are pretty active when it comes to creating memes on various issues. Undoubtedly, they have made social media a great place to be as they not only make us laugh but also have the ability to say very serious things in a funny way which further compels us to think over it.

The trailer of Akshay Kumar starrer “Mission Mangal” got released on Thursday and received an overwhelming response from movie buffs. Some dialogues in the trailer were quite powerful and meme artists found them of a great use for making memes.

One of the dialogues which was used maximum by the creative lot was the one spoken by Dalip Tahil, “The chances of this mission succeeding is less than 1%”.

The various state departments, especially the police departments of different states, have started making their presence felt on social media and they also use memes to make people aware of the rules and regulations that they should follow.

Mumbai Police is particularly very active as well as quite creative when it comes to making memes and this time also, they created a meme using the dialogue from “Mission Mangal” in which they warned people against driving under the influence of alcohol.

This is what Mumbai Police tweeted under the hashtag #MissionRoadSafety: 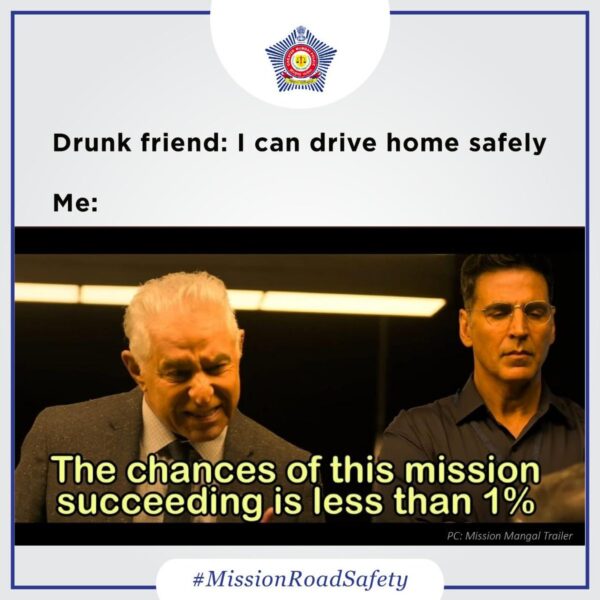 Dalip Tahil couldn’t stop himself from responding to this tweet and he wrote,

Anyone even considering driving under the influence of alcohol, I’ll say… ABORT! Abort the mission NOW! #MissionRoadSafety”

Anyone even considering driving under the influence of alcohol, I'll say… ABORT! Abort the mission NOW! #MissionRoadSafety

Earlier Rajasthan Police also made a tweet encouraging people to wear helmet and seat belt while driving and follow traffic rules. Here is the tweet from Rajasthan police wherein they used the scene in which Akshay Kumar is saying, “Poori duniya se kaho copy that (tell the whole world to copy that)”.

And @akshaykumar would say 'पूरी दुनिया से कहो, Copy That!'

The movie which is based on the Mars Orbiter Mission of Indian Space Research Organisation (ISRO) is directed by Jagan Shakti and it has a pretty big star cast that includes Vidya Balan, Taapsee Pannu, Sharman Joshi, Sonakshi Sinha, Nithya Menen and others. “Mission Mangal” will hit theatres on August 15 and it will clash with John Abraham starrer “Batla House”, so which movie are you going to watch first?

Shah Rukh’s Son Aryan Khan Dating A Blogger From London & Gauri Already Approved His Choice?
Priyanka Clicked While Smoking, Trolled For Her ‘Hypocrisy’. Desi’s Ask Where Is Her Asthma Now