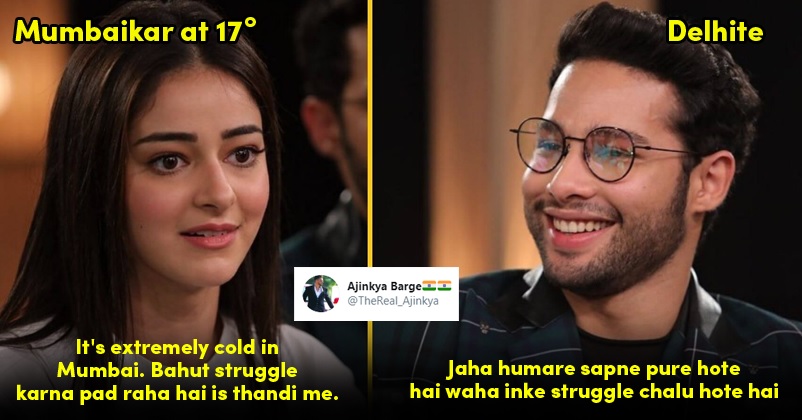 The Mumbaikars are not habitual of chilling winters as the temperature over there remains moderately hot in the winter season as well. So it was quite a big surprise for them when they were greeted with a cold climate on Thursday morning as they woke up.

The Mumbaikars didn’t miss the chance of expressing their feelings on the social media networks, especially on Twitter, after winter suddenly knocked their doors. As a result, #MumbaiWinters trended on the micro-blogging site and netizens stormed Twitter with hilarious memes and GIFs, showing how the residents of the city are feeling and dealing with the sudden change in climate.

Freezing point of WATER is 0°c.

Freezing point of MUMBAI is 15°c.

#mumbaiwinter
Temperature drops to 17 degrees Mumbaikars be like: this is the end of the world!
Meanwhile Punekars: "Aao kabhi haveli pe"

Mumbaikar its time to show off your branded winter jackets/muffler!!!#mumbaiwinter #mumbaifreezes

Mumbai has never been very cold and the minimum temperature that was experienced by the residents was 7.4 degrees Celsius and that too almost 60 years back on 22 January, 1962.

On the other hand, the states of North India are experiencing cold waves as there is snowfall in many hilly regions. The temperature in many parts of North India has gone into single digit while in some areas, it is near or lesser than zero as well.

Well, this is a good chance for the residents of Mumbai to experience winters, so have a great time.