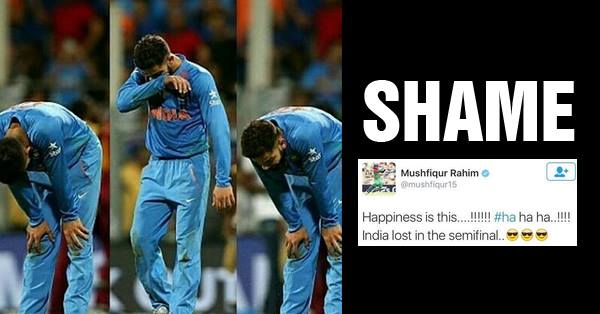 It seems that nowadays, people are happier with other’s loss than their own victory. When India lost to West Indies in the World T20 Semi-final, Bangladesh wicketkeeper Mushfiqur Rahim took to Twitter to express his happiness: When he started getting perfect responses, he deleted the tweet and apologized too but who cares…. The damage was already done!

But then the West Indian player Dwayne Bravo explained people what actually sportsmanship is:

However, it seems getting defeated by India in cricket has left a big scar on the heart of a Pakistani politician Mohammad Zubair, who is also the Chairman of the Privatization Commission of Pakistan.

What a match. Loved Indians being beaten.

So beating Indians of seeing them losing is more satisfactory than anything and that's true for all Pakistanis.the joy it brings is immense

@RealM_Zubair not ur fault, losers do that! U know when they know they aren't any good, they find satisfaction seeing the better one slip

@RealM_Zubair not ur fault, losers do that! U know when they know they aren't any good, they find satisfaction seeing the better one slip

@RealM_Zubair Well, maybe thats because you've never really got that satisfaction of your team winning.

This really doesn’t suit a minister 😛

@RealM_Zubair your a minister and you should tell some good things to ppl. Instead of doing this cheap activity, Spread patriotism to ppl.

@RealM_Zubair Even though India lost with West Indies we never hurt our players as you Pakistanis do.

@RealM_Zubair What a loser approach

Don’t have sense to prioritize things:

@RealM_Zubair That's the problem with Pakistan since 47 ! You have got the priorities always wrong!

@RealM_Zubair This is what Pak Ministers are upto? Well no wonder the cricket in your country has went to the dogs. Pity on those who voted!

Everybody knows about the India-Pakistan cricket rivalry and it’s an open fact that after every defeat in the World Cup, Pakistanis have broken their television sets but still public figures should exercise restraint on their emotions and think before making them public.

These 9 Pics Of Coca-Cola Ad Girl Venus Singh Will Make You Go Mad Over Her
11 Facts You Didn’t Know About India’s Michael Jackson – Prabhu Deva!!