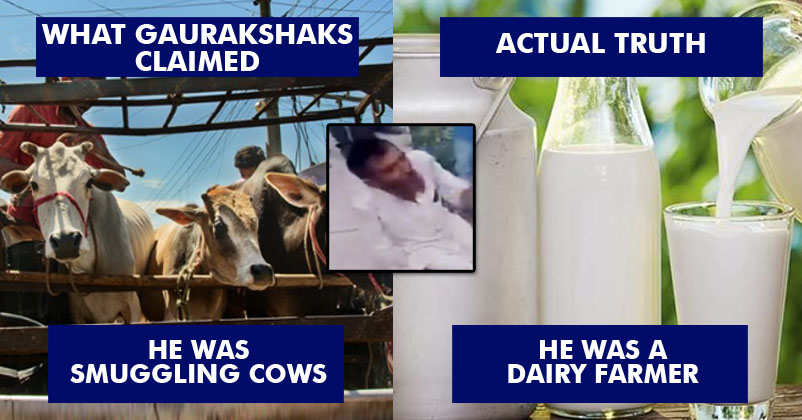 Last Friday, when Pehlu Khan (55) started the 240 kms journey from Jaisinghpur village in Nuh tehsil of Mewat to Jaipur, who would have thought that it would be his last journey?

Pehlu, a dairy farmer by profession, was thinking of increasing the milk production by purchasing a milch buffalo but he changed his decision and bought a milch cow after the seller milked 12 litres of milk in front of Pehlu. Irshad was with his father and brother Aarif when a group of gau rakshaks stopped them on NH8 in Behror, Alwar, on the evening of Saturday and attacked them. Pehlu was heavily injured and died on Monday. Here’s what Aarif told,

“My father was in a pickup truck with a Rajasthan number plate, along with Azmat, who is also from our village. There were two cows and two calves in the truck. Irshad, I and another villager were in the other pickup truck which had three cows and three calves.”

He also told how they were pulled out of their trucks and beaten up with sticks and belts and how gau rakshaks were accusing them of smuggling cows for slaughtering them. Aarif told that police reached the spot after 20-30 minutes and till then, they all were almost unconscious.

It is also surprising that an FIR has been registered against Pehlu and his sons for illegally smuggling cows based on the complaint made by a person known as Damodar Singh. It is written in the FIR that they didn’t have any receipt or document to prove that they had purchased the cows.

However, on the contrary, Irshad furnished the receipt which had the stamp of Jaipur Municipal Corporation, dated April 1, 2017, and its serial number is 89942. He said, “I don’t know how an FIR was registered stating that we had no purchase receipt. I bought the cows for Rs 45,000.” Their wallets and cellphones were taken by the people from the group. Not only this, Irshad claimed that they also took Rs. 75,000 from him while another was robbed of Rs. 35,000.

Majority of the villagers in Jaisinghpur are farmers and the count of dairy farmers in the village is 10. On Friday, it was not just Pehlu who went to Jaipur but four other dairy farmers also visited the city for purchasing buffaloes and cows; the biggest dairy farmer Zakir was also among them.

Zakir told that there were a buffalo, a cow and a calf in his pickup truck. He said,

“When I reached the spot, there were around 200 people along with the police. I saw Pehlu Khan’s vehicle and learnt that they had been beaten up. I escaped.”

Zakir has also showed his records to prove that Pehlu was a dairy farmer, as his son Irshad has been supplying him milk for the past four years.

Zakir further adds, “The difference in cost is at least Rs 20,000 when we buy cattle from Jaipur. I bought a cow last year.” He also showed receipts of various purchases of cows and buffaloes that he made from Jaipur in the last few years.

As per the FIR, Pehlu Khan was told by the accused, “whoever passes Behror with a cow will be beaten up”. Till now, police has not arrested even one of the accused – Rahul Saini, Navin Saini, Jagmal, Om Prakash, Sudheer and Hukum Chand.

What it appears as of now is that Pehlu Khan was a dairy farmer but gau rakhshaks didn’t even give him time or a chance to tell his side of story and did what they wanted to do, which cost Pehlu his life.

These types of incidents should be dealt in a tough manner and it must be made sure that they are not repeated. What do you have to say in this connection? Share your views in the comments section below.