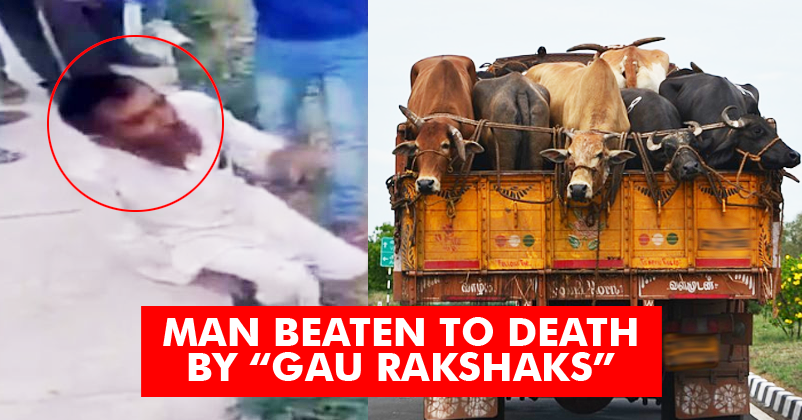 There is no denying the fact that cow is a sacred animal for Hindus but human lives do have their importance too. It is high time that the state governments take the matter of self-proclaimed cow vigilantes seriously and bring an end to their unlawful activities.

Pehlu Khan, a 55-yr man from Haryana, took his last breath on Monday night after losing a fight to death for 2 days. As per police, Pehlu and a minimum of four others were thrashed by gau rakshaks even after showing the documents that they had purchased cows and were not transporting them illegally.

“Gau rakshaks affiliated with the Vishwa Hindu Parishad and Bajrang Dal stopped four vehicles, near Jaguwas crossing on National Highway 8, on Saturday evening, alleging that they were illegally transporting bovines. These vehicles were coming from Jaipur, and were headed towards Nuh district in Haryana.”

It is also reported that the group of cow vigilantes allowed Arjun, one of the drivers, to escape. Ramesh Chand added,

“Five of the victims had to be hospitalized. Of these, Pehlu Khan died at a hospital in Alwar on Monday night. A post-mortem was conducted and his body was handed over to his relatives today.” Several videos are going viral on social media which claim to be of the same incident but till now, police has not made even a single arrest in this matter.

Another victim named Azmat (22) who was in the same pick-up truck in which Pehlu was travelling said,

“We were returning from a Saturday fair in Jaipur. I had bought two milk cows for Rs 75,000, and I had all the valid documents with me. We were not even trying to hide the cows, as we were taking them in a pick-up truck. At around 6 pm on Saturday, the gau rakshaks stopped our vehicle and asked us our names. They allowed our driver, Arjun, to leave. I told them I had all the documents but they pulled us out of the vehicle and beat us up. They took away Rs 35,000 from me. I later lost consciousness and woke up in a hospital at around 1 am on Sunday.” This is what Pehlu’s uncle, Hussain Khan, said, “Before he died, Pehlu told us that they beat him up and then told him to run, saying ‘tu buddha aadmi h, bhaag’ (you’re an old man, run away)… But they chased him and beat him up again.”

Azmat as well as other three injured persons, Rafiq, Irshad and Aarif, have returned to Nuh on Tuesday but they have made allegations against the staff and management of Kailash Hospital in Behror, Alwar, saying that they didn’t receive proper care in the hospital, Yusuf, Azmat’s brother, said, “Everyone at the hospital was looking down at us… Pehlu died because he didn’t receive proper care.”

“I reached the hospital on Saturday night but they didn’t allow me to see my brother. I just wanted to know if he was dead or alive. They only granted permission on Sunday morning. We asked the district administration to shift them to another hospital but they did not agree.”

However, the director of Kailash Hospital, Shyam Sunder Sharma, has refuted the allegations as he said, “We gave them the best treatment and also gave discount on the fees… Police were posted at the hospital.”

However, cases have been registered against the transporters as well under the Rajasthan Bovine Animals (Prohibition of Slaughter & Regulation of Temporary Migration or Export) Act, 1995. Rahul Prakash, SP, Alwar, preferred not to make any comment on this issue.

The government needs to tackle this matter with hard hands otherwise the outcome will be a threat on humanity. What do you have to say about it? Share your views in the comments section below.

Rajasthan Has Sought A Smart Way For Its Highways To Avoid The Ban On Alcohol
Cops To Pay Fine Upto Rs 5,000 If They Fail To Complete These Duties On Time!