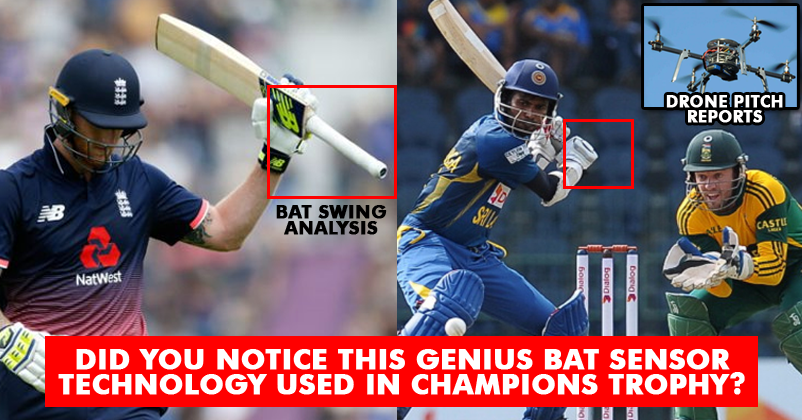 Cricket is not just a sport for our nation its a passion. People remain glued to the TV sets while watching the match and don’t want to miss even a single ball or a shot. ICC knows about it and therefore continuously tries to make the cricket watching experience more technologically advanced for viewers.

The latest development in this process is Bat sensors that you might have already noticed while watching the matches. We’ll tell you about the idea behind it now.

These small sensors on bat handle will provide previously unseen precise details about a player’s bat speed and angle of back lift. Technology giant Intel has developed this sensor for ICC and it’s placed on top of the bat handle. As per reports in Cricket.com the aim is to provide more information to television audiences and develop a coaching aid.

“How many times have we spoken about people having ‘fast hands’ or ‘great bat speed’? “But what does that mean? We’ve never quantified it.”

Each team is expected to have up to five players using the technology in the Champions Trophy. England all-rounder Ben Stokes, opener Alex Hales, India’s Rohit Sharma and Ravi Ashwin are among those to confirm that they will use the devices. “When I first played for England, I had never really seen myself on television. I remember playing in Jamaica, getting out and walking through the hotel lobby and Geoffrey Boycott shouting at me ‘Hussain, you’ll never get any runs with that open bat face’. “Something like this can show you the exact angle of your bat.”

Well this one has surely taken the Cricket watching experience to another level. It’s going to be more fun now. Don’t you think?

Continue Reading
You may also like...
Related Topics:cricket, ICC

#WalkOutFromPakMatch Is Trending On Twitter! Here’s Why Everyone Wants Team India To Boycott Match
16 Memes To Celebrate India’s Victory Against Pakistan! India Has Defeated Pakistan Like A Boss!