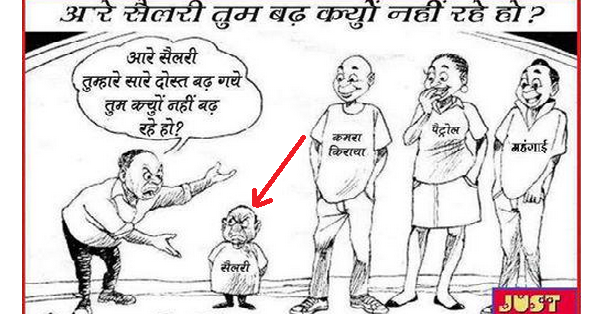 It’s a universal fact that we are never happy with our salary and probably never will be; no matter how much it is! It’s probably because we always weigh zeros in our salary with the amount of labor and time we give our job. However, as we all know, you don’t always get what you want. Speaking of the topic, #MySalaryIsLike is trending on Twitter and users are openly sharing their salary but in the most hilarious and amazing way that you would have never thought or seen before!! What’s more surprising is that instead of getting sad or disappointed, you’ll burst into laughter seeing what users have tweeted by means of amusing images and GIFs. And for the first time, it will become a topic to give you moments of laughter…

Below are the 16 most mind-blowing and funniest tweets for #MySalaryIsLike:

My Gross Salary looks gross and my Net Salary is less than my monthly net usage.#MySalaryIsLike pic.twitter.com/zLoRUlZ88o

"How much is your salary?"

#MySalaryIsLike In hand salary can come in one hand pic.twitter.com/VgEhC6TnVw

My family when relatives ask about my salary. #MySalaryIsLike pic.twitter.com/F5rDQBaXMQ

*How much is your Salary?*

And the epic one:

I showed this guy my salary slip. You can guess what #MySalaryIsLike pic.twitter.com/CVhZs4A8om

How did you find these tweets? Awesome and mind-blowing, aren’t they? For sure, they would have tickled your funny bone! Share the article with your kith and kin who too are troubled with their salary and give them a chance to laugh on it too!! But don’t forget to leave your views about it in the comments section below.

Have You Seen Photos Of Shahid & Mira’s Wedding Venue? They Are Gorgeous & Will Blow Your Mind Away
15 CELEBRATE PRIDE THEME Trolls That Will Make You Go ROFL!!