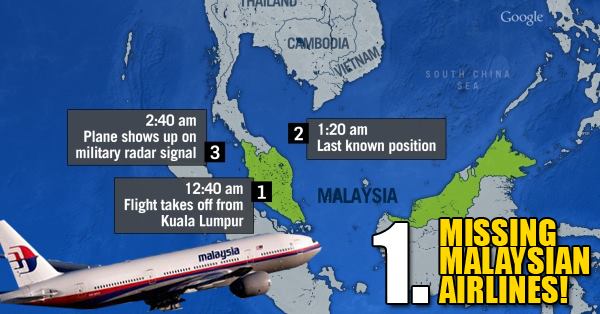 Mysteries have always intrigued mankind. There are some mysteries that are since long unsolved and for years to come may never be solved. Here are few mysteries that if given to the best detective fantasy character Sherlock Holmes would give him a tough time.

It is unclear as to what was the fate of this Malaysian flight. There were two passengers who were travelling using stolen passports and the actual holders were found to be safe at home when contacted by authorities. Vietnamese Navy found a 12 mile long slick of oil in the ocean but nothing has materialised so far.

2. The disappearance of Amelia Earhart Pioneering American aviator Amelia Earhart disappeared along with her navigator Fred Noonan in her Lockheed Electra on July 2nd, 1937 in an attempt to circumnavigate the globe. Earhart was the first woman to fly solo across the Atlantic. She disappeared near Howland Island in Central Pacific Ocean. Researchers have always been fascinated with the mystery. Some say she simply ran out of fuel and crashed but if some are to be believed they consider her to be a spy of Franklin D’ Roosevelt and was captured by Japanese. Others have the opinion that she got stranded in a Japanese island and eventually died and body was carried away by crabs while few say she survived the mishap and is settled in New Jersey under a different name.

3. The legend of the Bermuda Triangle On December 5th, 1945 six flights disappeared into thin air. A training mission of Navy Avenger planes led by experienced flight instructor Charles Taylor took off from Fort Lauderdale, Florida. In about an hour and a half into the mission the pilots reported that they had become disoriented and could not recognise landmarks below them. In radio transmission Taylor told the Naval Air Staff at Fort Lauderdale that both of his compasses were out of action. Despite efforts from the Air Station controllers the team were unable to find their bearing and as weather deteriorated they could not find landfall and ditched into the sea killing all the 14 airmen and crew onboard. Weirder still the plane (PBM Mariner) sent out to trace the lost mission was also lost and never heard off and all the 13 crew members presumed dead.

4. The sleeping beauties of Kalachi The residents of Kalachi village, Kazakhstan just can’t seem to keep their eyes open. Several villagers fall asleep in broad daylight and remain asleep for a couple of days. There is no apparent reason for these ‘sleep incidents’ and more than 100 residents have inexplicably fallen asleep even when they were not tired. In September 2014, several children who were attending school first day of the new academic year also fell asleep for no reason. Medical experts were unable to come up with a verified explanation. Officially Area 51 is a remote facility of United States Air Force. Unofficially it is a hotbed of rumours and conspiracy theories mostly relating to UFO sightings. It’s remote location in Nevada coupled with its intense level of secrecy (all the research relating to Area 51 is classified ‘Top secret’) and also its close proximity with the ‘Extraterrestrial Highway’ (location of countless UFO sightings) have combined to make public highly suspicious of what really goes on behind the gates of Area 51. On December 18th, 2012 a sudden, deafening boom startled residents of Jodhpur. It seemed to come out of nowhere, crashing in the sky like the sonic boom caused by an airplane breaking the speed of sound, however it was much more aggressive in nature like a massive explosion. The citizens were concerned about the sound and asked around and it turned out that no airplane had been flying over the area and no explosion had taken place. Even the Indian Air Force denied any of their planes to be carrying out sorties at the time. The source of the Jodhpur Boom has been a complete mystery.

7. The Magnetic Hill of India that defies gravity Located in the Ladakh region on the Kargil-Leh-Ladakh highway near Himalayas is a strange hill said to be magnetic. If you park a car on the road leading to the top of the hill and leave it in neutral it rolls up the steep road on its own against gravity at speed of up to 20 kmph (12.4 mph). It is a natural wonder and as per the guides this supernatural phenomenon is called the ‘Himalayan Wonder’ and is an attraction for travellers. It is a mystery as no worthwhile strong magnetic fields can be recorded on the magnetometers and research shows a fluctuation in strength which is not very strong.

8. The lifeboat of Bouvet Island Bouvet Island in South Atlantic is one of the most isolated places on Earth. The nearest land mass is Antarctica which is more than 1,700 kilometres (1,100 miles) further South. Since plant life is unsustainable there thus neither in past and more likely nor in future will it be inhabited. Yet when a British expedition arrived from South Africa in 1964, they discovered an abandoned lifeboat in a lagoon on the island. Not far from the boat were oars, wood, a drum, and a copper tank. The boat was in a good condition, but the expedition party couldn’t find trace of any passengers. The boat had no identifiable marks on it and therefore could not be traced back to any nation or shipping company. Even more strangely, when another expedition was sent to Bouvet Island two years later, the lifeboat had vanished along with the other objects found earlier. Till date no one knows how the boat got there or what happened to the people that were in it.

9. The UFO sightings at South Africa On September 14th, 1994 several Zimbabweans witnessed a UFO which they initially thought to be a meteor or an American space vehicle. Two days later something landed in the schoolyard of Ariel School, Ruwa, Zimbabwe with three to four things beside it. 62 schoolchildren who witnessed it had little or no exposure TV or popular press accounts of UFO. On being interviewed by Cynthia Hind after the interview and asked to draw them the picture of what they saw they drew what is above. It is an intricate analogue computer found in shipwreck near Greece in 1900. The device was used to determine the positions of celestial bodies using a mind-bogglingly complex series of bronze gears. It was created 100 years before the birth of Christ, and more than 1,000 years before anything even approaching its level of technological complexity and workmanship would be discovered again. The device also came long before our modern understanding of astronomy and physics. The Antikythera mechanism was built over 1,600 years before Galileo was born, and over 1,700 years before Isaac Newton was born. The Vela Incident, also known as the South Atlantic Flash, was an unidentified ‘double flash’ of light detected by an American Vela Hotel satellite on September 22nd, 1979 near the Prince Edward Island off Antarctica in the South Indian Ocean, which many believe was of nuclear origin. The most widespread theory among those who believe the flash was of nuclear origin is that it resulted from a joint South African-Israel nuclear test. The topic remains highly disputed.

Continue Reading
You may also like...
Related Topics:Mysteries That Can Give Sherlock Holmes A Tough Time To Solve