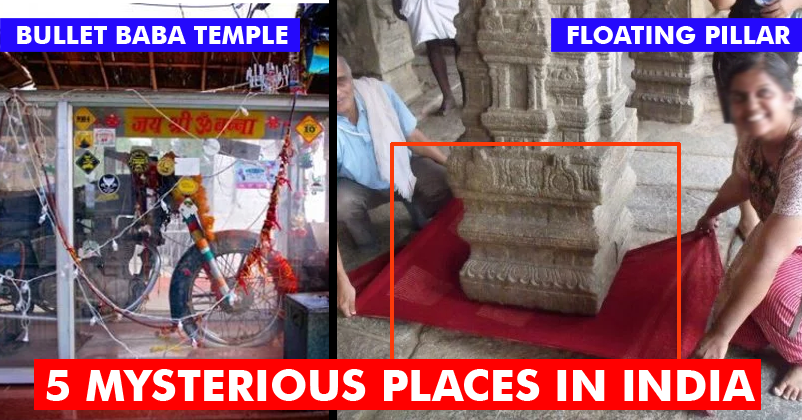 India is a land of mysteries. There are lots of places in India that are having unsolved mysteries. There are lots of secrets that are not being debunked yet. We have often heard about places in the world like Bermuda Triangle and many others, But India is not less mysterious than any other place in the world. Let’s have a look at some Indian mysteries places that will force you to scratch your head.

The Village Of Twins Talakad village in Karnataka is considered as “Mini-Desert”. This mysterious village is situated on the banks of river Kaveri. It is believed that Talakad village once had 30 temples in it, out of which 5 temples were of Lord Shiva. According to the villagers, a widowed devotee of Lord Shiva once cursed this land, as a result, this village got converted into a desert. There is a very famous temple in Bandai, Rajasthan. There is a very strange story behind this temple. A man named Om Singh Rathore, or Om Banna, had died in a tragic accident while riding back to home on his bullet. After which lots of unusual things started to happen, Police found Bullet bike at various places and they empty its fuel tank every time and bind it in chains, but it would return to the same spot every single time! When the authorities finally gave up, the locals built a temple around this bike. Lepakshi, Andra-Pradesh is very famous for its architecture and paintings. But the strange thing about this place is that it has a floating pillar inside the temple which is standing without any support. There are almost 70 pillars, out of which 1 is hanging in the mid-air. People have a belief that passing object under the pillar will bring good luck for them. This is an amazing place. Rameshwaram in Tamil Nadu is one of the most important places in the Hindu mythology, as it is the place where, according to Ramayana, Lord Rama’s Vanara Sena built a bridge of floating stones all the way to Sri Lanka. But there is something else about the bridge that makes this place one of the most mysterious places in India. According to Ramayana, the bridge was built of stones that would stay afloat once the name of Lord Rama was scribbled on it. As it turns out, this wasn’t just a story. There are still lots of stones found in Rameshwaram that float on the surface of the water. This is truly amazing.

So, these are some of the most mysterious places of India. Please share your views in the comments section below.

Amazing Scientific Discoveries By Ancient Indian Saints That Will Make You Proud
10 Things Science Has Got Totally Wrong!