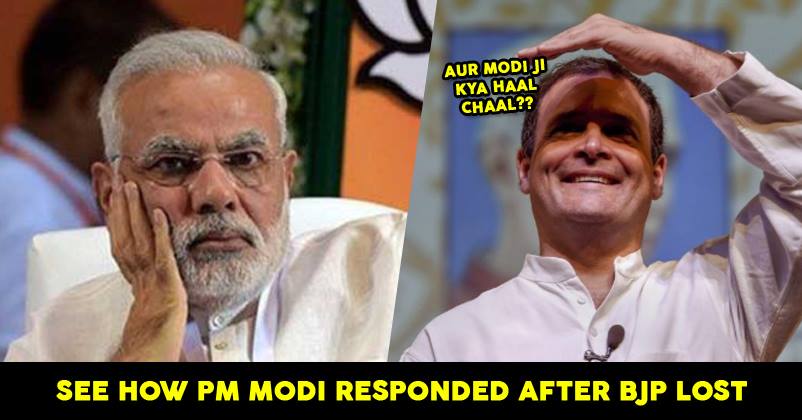 The result of Assembly Elections in Rajasthan, Madhya Pradesh, Chattisgarh, Mizoram and Telangana has been an eye-opener for BJP. Exit polls had given the signs already and the final results have shown similar results.

While it’s a great news for the supporters of Congress, for BJP it has come as a strong jolt. At the time the party is aiming victory in 2019’s Lok Sabha elections, this loss has proved to be a shocker. It’s a time for BJP to re-evaluate the work they have done. It’s a time to check how much development has actually been done and how many promises have proved to be fake.

It’s one thing to be blindfolded and believing that 2019 elections are in hand and another to find issues and fixing them quickly. BJP, if still can correct their doings then have huge chances in the Lok Sabha elections but otherwise, there are many surprises in the store.

PM Narendra Modi took to Twitter to share his reaction after the Assembly Elections results. He said that –

We accept the people’s mandate with humility.

I thank the people of Chhattisgarh, Madhya Pradesh and Rajasthan for giving us the opportunity to serve these states. The BJP Governments in these states worked tirelessly for the welfare of the people.

We accept the people’s mandate with humility.

I thank the people of Chhattisgarh, Madhya Pradesh and Rajasthan for giving us the opportunity to serve these states. The BJP Governments in these states worked tirelessly for the welfare of the people.

Its wake up call & introspection time for BJP & its leaders.They have wasted time in unproductive politics of abuse & arrogance rather delivering to people on their promises of corruption, Rising prices, Unemployment, Proper execution of Schemes. They have failed miserably on all

PM Modi, I like your response to the state election results. Well done Sir!

Bjp should focus on the agenda of development. Yogi needs to take a back seat. We need people like @nitin_gadkari @SushmaSwaraj @PiyushGoyal to be face of BJP. People voted for development. A lesson loud and clear to BJP.

It's time to introspect sir. You deceive people who was with you all the time and for vote bank you passed a bill against SC order. Karma bites back.

Do you have any message for Modi ji and BJP?

Akhilesh Yadav Mocks Modi Sarkar Using Slogan After Election Results, Says “Abki Baar…”
Results Say That This May Be The Reason Behind BJP’s Failure At The Assembly Elections