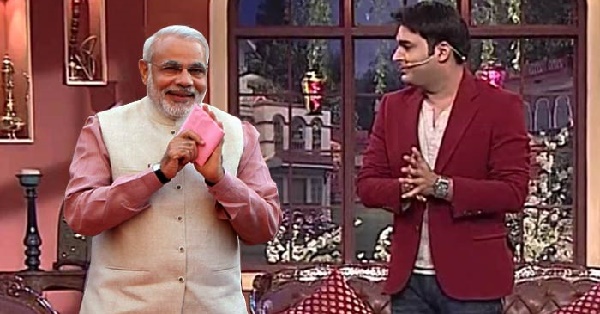 There is absolutely no doubt regarding the popularity of famous TV show Comedy Nights With Kapil which is a light humor program with Kapil Sharma being the host who invites celebrities on his show and the celebs too think of it as a vital platform for the promotion of their upcoming movies. At one fell swoop, there are quite a few people whom viewers actually want to see on Comedy Nights and desperately waiting for their desires to be fulfilled. One of these names is Narendra Modi, the Prime Minister of India.

People love to interact with their favorite stars and personalities and CNWK facilitates audience with this and probably the same is the reason as to why the show has proved to be a superhit; no doubt, Kapil’s jokes and funny approach also being a major factor!

On Narendra Modi’s 65th birthday, not only the nation but also Twitter gave him best wishes plus users expressed their wish to see Narendra Modi with Kapil Sharma on Comedy Nights With Kapil to promote Make In India!! As a result, #WeWantNamoOnCNWK trended on Twitter and below are 11 best tweets under this hashtag:

If OBAMA cn go on an American television show,

It will be my dream show- if @narendramodi comes on @KapilSharmaK9 show! Both are magical men of India. #WeWantNaMoOnCNWK..now dreaming on.!

If it really happens it will be epic #wewantNamoonCNWK

What are your views in this connection? Share your opinion in the comments section below.