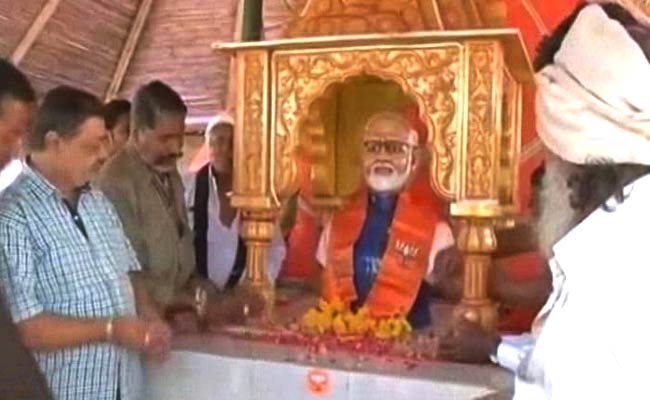 It’s really the heights of being insane or lack of intellect that people constructed a temple in the name of PM Modi in Gujrat. Well, as far as reaction of Modi over this irrational act is concerned, he seems to be quite dismayed and upset. Moreover, he has also articulated his utter discontentment and unhappiness over the matter through his tweets. Not only this, he also urges people to quit the idea and demolish the temple.

Narendra Modi advised that those who have built the temple or contributed for it better give their valuable resources and time for making our country tidy. And if they proffer their endeavors and devotion towards Swachh Bharat, it would please him more than the deed of temple building.

As per PM’s tweet on Thursday morning, “Have seen the news about a Temple being built in my name. I was appalled. This is shocking & against India’s great traditions.”

Creation of the temple completed in about two years with a photo of PM primarily and became recognized when Modi won the elections last year. What’s worth mentioning here is that the idol of Modi could be finally constructed in almost four years, as stated by Ramesh Undhad, the fund donor.

According to Undhad, “This idol cost us Rs. 1.65 lakh. We tried getting it made from various artists for over three to four years but no one could make an exact copy of Modi. Then finally we called artists from Odisha and they created this idol, which looks exactly like Modi.”

3 MLAs Who Made BJP Proud – Even Tata Nano Has More Seats :P
Did You Check Out The List Of Words Banned By Censor Board?