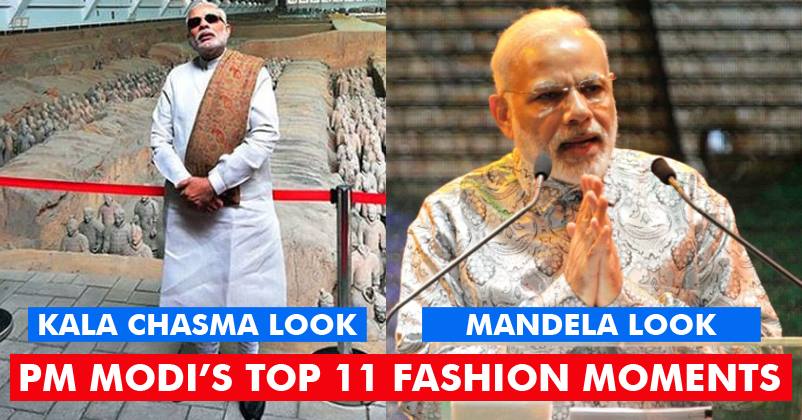 Narendra Modi is perhaps the most famous and popular person on the planet EARTH right now. And when a person has such a big chunk of ears and eyes on him, his way of doing anything inspires and affects millions of people who look up to him for inspiration.

Apart from his controversial economic policies, one thing that caught the eyes of people was his dressing sense in the past years. Let us all go through his style statement that he made in the past years on different occasions.

1. When he flaunted his Desi Attire on his visit to Bhutan. A simple yet classic slick appearance. His Khadi-Kurta inspired by the visionary Mahatma Gandhi created wonders over the social media and from this, the Khadi-Kurta once again came into the business.

2. When he kept it sassy on his visit to Brazil. The choice of his dressing sense was well thought out, deliberate and calculated. His meeting with the Brazilian President Dilma Rousseff also had a fashion agenda other than the policies which they had discussed. True, an image is always important for personality development.

3. When he showcased the spirit of Saffron color on his visit to Nepal. The choice of the color along with the country he visits is just sublime. His way of wrapping the fold of Saffron colored Shawl over his hand while wearing a Saffron Kurta gives us a complete picture of his presence of mind when it comes to fashion.

4. When his calmness was shrouded in his Bandgala on his visit to US. He always likes to keep it classic and sophisticated in his wine colored Bandghala suit. A perfect attire to portray a person’s sharp image and attitude which plays an important role on many occasion.

5. When he beautifully blended in all sorts of fashion while welcoming US President Barack Obama. His ability of mix-matching his fashion was beautifully portrayed when he welcomes Barack Obama on his 2015 Tour where he wore a ‘NEHRU JACKET’ along with imprinting the art of ‘MAKE IN INDIA’ on his shawl.

6. When he taught the world how a well-tailored black suit should be worn in Germany. While many people wrongly go over the board when it comes to wear a well-tailored black suit, Narendra Modi went ahead with it and pulled it off with confidence.

7. When his coolness shone in his white suit on his visit to Japan. His presence of mind of choosing color according to the location is always perfect. His chose to go all white in his kurta-churidar-jacket number when it came to visit the two prominent ancient Buddhist temples in Japan – Toji and Kinkakuji.

8. When his #KALA_CHASHMA swag owned the whole China on Social Media. Apart from the amazing reactions that Twitter users had it for him, he did absolutely stand out from the rest of the 8,000 warriors in the Museum of Qin Terracotta, China.

9. When he wore the raw Mongolian robe. This fashion sense explains us his desire to connect with the subject in its deepest root. He chose to wear the typical Mongolian robe with a white hat while attending the Mini Naadam Festival in Mongolia’s Ulan Bator.

10. When he added another shade in already established ’50 Shades Of Grey’ on his visit to South Korea. He chose not to go too shady with his choice of colors and took the perfect classic patterned gray suit that made him look polished and refined with energy.

11. When he went all ‘rang-bi-ranga’ on his visit to South Africa. Honestly, He was the only other person other than Ranveer Singh who could pull off such a fashion statement. This dressing sense is still today the most talked about in the world of fashion and glamor. PM Modi definitely knows how to keep things ‘balanced’. Right ?

So these were some of the amazing styles that Narendra Modi had put on in the past few years. Well apart from showcasing these styles, he has also signed in important deals on his visits to different countries which are very important for our country. So what are your views about his style statement. Do let us know in the comment section below.