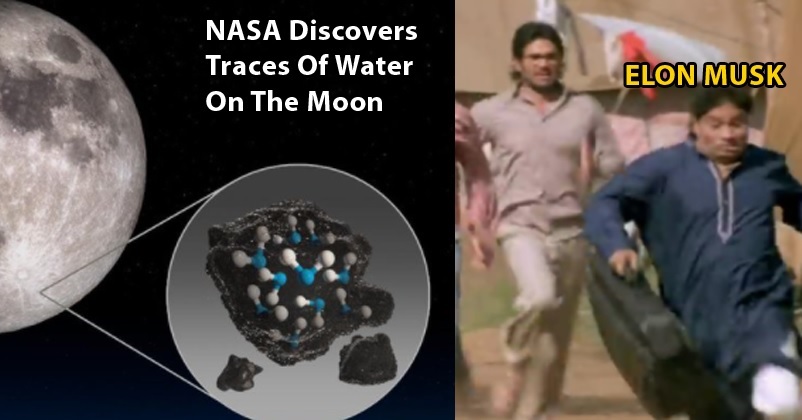 Moon has always attracted human beings whether it is for spiritual reasons or for scientific reasons and now netizens are pretty excited as the traces of water have been found over there. For a long time, it was heard that there may be water on the surface of Moon as the scientists were a little confused as to whether it was water or hydroxyl (a molecule which comprises of one atom of water and oxygen each).

However, now the National Aeronautics and Space Administration (NASA) has confirmed that there are traces of water on Moon and the co-author of the study, Casey Honniball has stated that if they are able to find water in ample amount even if in some locations, it can be used for drinking or for converting it in oxygen or fuel for flying rocket.

For the 1st time, molecular water was discovered on a sunlit surface of the Moon, suggesting water may not be limited to cold, shadowed places. Goddard postdoc Dr. Casey Honniball, made the discovery using NASA's @SOFIAtelescope airborne observatory. https://t.co/TUFKK8Rl9x pic.twitter.com/1wiy05yS4r

The flying observatory of NASA, SOFIA has further supported the news and confirmed that water has been discovered in the Clavius Crater of Moon and the quantity of that water is around 350 ml.

We confirmed water molecules 💦 on the Moon’s 🌖 sunlit surface for the first time! This suggests water may be distributed across the Moon’s surface, and not limited to cold, shadowed 🌑 places.

Water molecules were detected in Clavius Crater, one of the largest craters visible from Earth, in the Moon’s southern hemisphere. pic.twitter.com/O6D5IDAoyv

The water may be delivered by tiny meteorites that deposit it on impact. ☄️ pic.twitter.com/t0Yr0tN706

Or the water could be formed by the interaction of energetic particles ejected from the☀️Sun. pic.twitter.com/NcRceOzX8Y

This was certainly a revelation and Twitterati was in no mood to hold back so here are some selected reactions for you:

Water on the moon pic.twitter.com/WKBOCzmazX

NASA: “we found water on the moon; not sure yet if we can use it as a resource”

Water on the moon, you say? pic.twitter.com/lL43diEIR4

THERES WATER ON THE MOON, MOON POOL PARTY ON ME #NASA #moon pic.twitter.com/T57r95eRxn

When you hear there is untapped water on the moon. pic.twitter.com/bl7sxqPZeP

Céline Dion fandom on their way to get water from the moon @ NASA pic.twitter.com/DmyBC5iFV0

The chances of human exploration have increased to a great extent now and in some time, we may see human colonies as we see in Hollywood movies. Well just to remind you, selling of plots on Moon started quite long ago and late actor Sushant Singh Rajput had also purchased a plot on Moon.

So are you ready to shift to Moon?

Continue Reading
You may also like...
Related Topics:moon, NASA, SOFIA, water on Moon