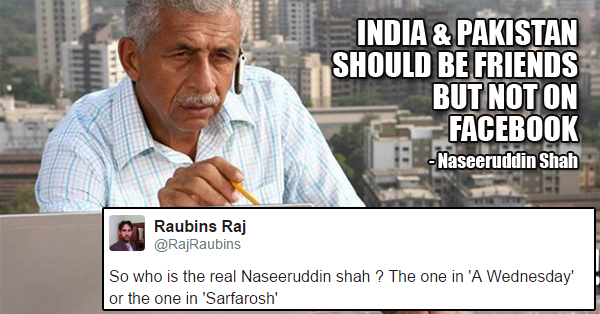 Shiv Sena was already under criticism for protesting against Paksitani singer Ghulam Ali and now again they are under attack for agitating against the launch event of KM Kasuri’s book “Neither a Hawk Nor a Dove”, Kasuri is Pakistan’s Ex-External Minister. The event was held as it was scheduled to be on Monday evening; however the organizer Sudheendra Kulkarni was assaulted by Shiv Sena workers before the event.

The members of the panel who were present at the event were Bollywood actor Naseeruddin Shah, journalist Dileep Padgaonkar and the famous advocate and historian AG Noorani.

Naseeruddin praised Sudheendra Kulkarni for not cancelling the event and making it happen despite the threats from Shiv Sena and whatever happened with him earlier in the day. Naseeruddin said, “It takes immense courage to do what Mr Kulkarni did this morning at the conference. I thank you Sudheendraji for what you did, and for asking me to be her.”

He further added, “Whenever I was there in Pakistan, never ever was any of my show cancelled or was held up. I have always received love and affection there.”

He told that he never faced any problem in roaming on the streets of Lahore without any security.

He is criticized on Twitter for his statement and you can’t miss to check out these tweets:

Naseeruddin Shah aka Gulfam Hasan,not sure about our Brainwash, but u've most certainly got your brain washed off your head.
What an actor !

Cut this Aman Ki Asha and cultural ties bullshit..Pakistan is an enemy state nd it has proved it time nd again Naseeruddin Shah

I think, Naseeruddin Shah is one of the best actors of all time. But he is definitely not a Nationalist.
Borders p jao tb pata chale

So who is the real Naseeruddin shah ? The one in 'A Wednesday' or the one in 'Sarfarosh'

Naseeruddin Shah sir ! I really like to know if your family members were victim of 26/11 and still hold the same view on Pakistan.

Naseeruddin Shah may have played an Epic Role in "A Wednesday",but he could b very well "Gulfam Hasan" in real life. https://t.co/DPxq6lP0AM

We use inks/ shoes/ eggs etc to protest

They use bombs/ guns/ grenades etc

Yeah the same way how Pakistanis are being ever since they are born. Naseeruddin Shah Miyan ! https://t.co/HpRz0PWWU6

Please help us understand whom do you support during India vs Pak cricket match ?

Twitter Came Forward In Support Of Farmers; These Tweets Are Satire On Politicians
Modi Compared Badal To Mandela & Twitter Could Not Digest It; Puked Satire On Modi