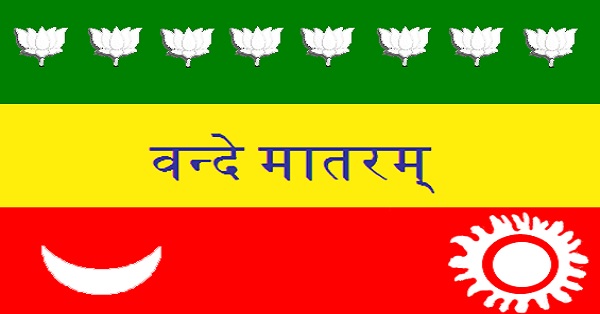 National Flag is the pride of every citizen of a free nation. As Mahatma Gandhi said “A flag is the necessity of all nations. Millions have died for it.” With the same conviction towards the “Tricolor”, many protected it with their blood and many are ready to do the same. However, this was not the first flag representing our country. It went through many vicissitudes to arrive at what it is today. The evolution of the flag depicts the political development the nation have gone through. It was hoisted on August 7, 1906 in Calcutta (now Kolkata) in the Parsee Bagan Square (Green Park). It is known to be the “Unofficial Flag of India in 1906”. Second National Flag of the Nation

It was raised by Madame Cama and her exiled revolutionaries in Paris. Keeping everything same to the first version, only the lotus in the first strip were replaced with seven stars representing “Saptarishi”.

The Third National Flag was hoisted during the Home Rule Movement, in 1917 The flag used during the Home Rule movement in 1917

This flag was hoisted by Lokmanya Tilak and Annie Besant in 1917.

The Fourth National Flag proposed by a national youth at All India Congress Committee. Gandhiji suggested to add the white strip and the spinning wheel to represent all the other communities and the progress of the nation. The flag unofficially adopted in 1921

Image Source
The red and green colors in the flag represented the two major communities, Hindus and Muslims. It was proposed and adopted in 1921, when the youth met Gandhiji at Bezwada (now Vijayawada). The flag adopted in 1931. This flag was also the battle ensign of the Indian National Army

Image Source
In 1931, It was adopted as the National Flag. This flag contains three strips of the color saffron, white and green, along with the Gandhiji’s spinning wheel. This flag was also the battle ensign of the Indian National Army. The present Tricolour Flag of India

Initially being the tricolor flag of the Congress Party was later adopted as “Tricolor Flag of Independent India”. The importance of the colors of the strips remained the same. It was only the spinning wheel replaced with the Dharma Chakra of Emperor Ashoka, depicted to be “the wheel of the law”.

10 Unusual Guinness World Records You Should Know Right Now
Inventions And Things That Show The World Is Unfair To Left Handers.