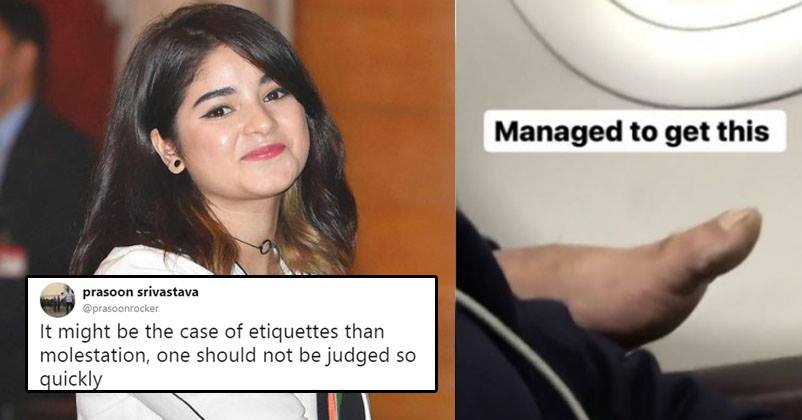 Every news channel is covering the molestation case of Zaira Wasim in a Vistara flight. As per Zaira, 39-yr Vikas Sachdeva molested her by rubbing his foot on her back and neck and nobody came to her rescue. 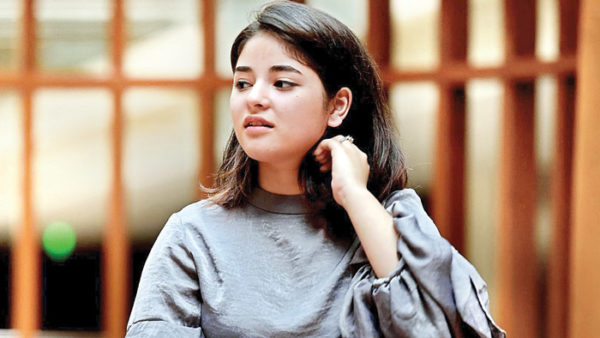 The accused was arrested by the police and booked under the relevant sections; however, many sections of the media are also questioning the delay made by Zaira in reporting the case and that too, on her Instagram account and not in a police station.

The situation and manner in which she is alleging to be harassed are also under the scanner and a National TV reporter Jagrati Shukla and Data Scientist Gaurav Pradhan have slammed her for creating this drama just to get publicity.

Nowhere has #ZairaWasim stated that she did complain to Cabin Crew about the unruly passenger & that they ignored her. Her manager is peddling lies.

Instead of Complaining, Confronting & Changing her seat, she's going Live on @instagram.Priorities?

In a series of tweet, Jagrati Shukla has raised questions on the story told by the 17 years old actress and also pointed out that Zaira was travelling with her mother.

She asked as to how it can happen that the mother-daughter remained silent and went through such a horrible experience.

1/3 Why #ZairaWasim's molestation allegations seem fishy and a mere Publicity Stunt?
>This picture means nothing, it (putting foot on armrest) doesn't amount to any offense, let alone Molestation.
>Why didn't she Complain to Cabin Crew, Confront Passenger, Request change of Seat? pic.twitter.com/eeiJAio9Qu

2/3
> Why didn't #ZairaWasim raise an alarm while being molested? Why didn't she seek help? She instead clicked useless pics.
> Why did she and even her Mother Refuse to Lodge a complaint with the Ground Staff when they asked for it?
> None of her pictures back any of her claims.

If Molestation did occur, why hasn't she filed an FIR yet?

Gaurav Pradhan has also asked her by showing the seating position in an airline as to how it is possible for any person to put his feet on her neck and back until and unless she is sitting on the armrest. 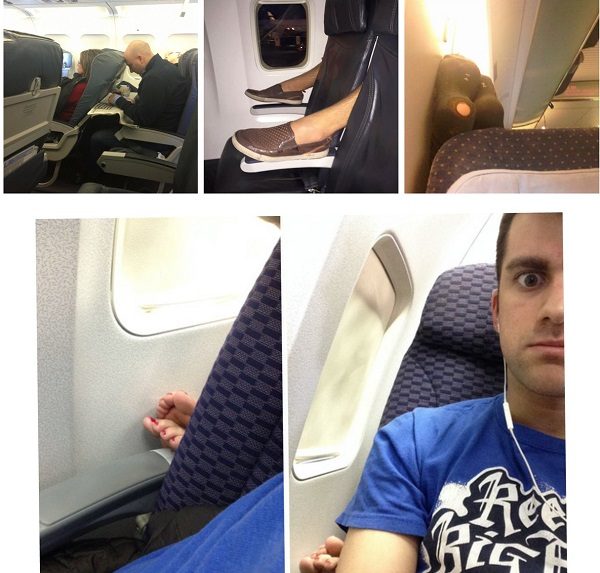 .#ZairaWasim This is Airline seating position. Pls explain how can someone put his feets on your neck and back? unless U were not sitting on the seat but the middle armrest

I am traveling in flights for last 25 years but can't understand HOW anyone can touch Neck and back with feet?#ZairaWasim story is Publicity STUNT nothing else

The real victim is @airvistara pic.twitter.com/7JgRMd5fIo

It is not just these two who have raised questions but many other Twitter users are questioning the logic behind the allegations and some are terming it as an etiquette problem rather than molestation.

It might be the case of etiquettes than molestation, one should not be judged so quickly
No offense Pic for reference 👍👍#ZairaWasim pic.twitter.com/zK6vrDXU5F

Killing two birds with one stone?

So other side of story seems more convincing!#ZairaWasim molestation case turned out to be a mere publicity stunt! Also it could be an attempt to demonise Bharat as the worst country for women for Zaira's pakistan loving brave mom! Killing two birds with one stone?😔

What will be legal punishment for her?

IF its proven that #ZairaWasim maligned an innocent man for cheap publicity; what is the legal consequence/punishment for her? pic.twitter.com/y4wzlrSKNk

Now will u believe accused wife's version and please arrest #zairawasim @MumbaiPolice ? Since u believed Instgram version of #zaira, in the same way, please believe wife of sachdeva's version. No discrimination please. pic.twitter.com/4O5JAbA4ob

Is she the same minor?

Is this #ZairaWasim the same "minor" who ACTUALLY showed her ferocity in not only insulting a Union Minister for his sincere compliments, but also lecturing him ONLY bcz he said something in the context of Hizab… But now can't confront an alleged molester??#AskingForAFriend pic.twitter.com/xbVxakCTIS

This girl #ZairaWasim is a big drama. She wants publicity at any cost. Why she didn’t file FIR if someone harassed her? She is saying in her video that every girl should help herself. So then why she is not doing that. Just crying for sympathy. Nautanki!

Irony at its best:

WARNING for all men & boys

If ur seat in flight, train or bus behind or by side of any Female of any age, pls either change ur seat or drop the idea of travel

U never know, U will not get even one chance to explain even by law and punishment is "Hang till death"#ZairaWasim

Many users questioned about her mother:

I guess #ZairaWasim mother who was brave enough to host Paki flag was in flight and still Daughter get molested and she did nothing?

I laud #ZairaWasim for speaking up but she was in a plane and not in a public bus where there was no crew to help.

It could have as well been a case of mere bad manners which also is not acceptable but unfortunately very common on flights and must be reported then and there. pic.twitter.com/Vl0G93mO8x

Why didn’t she express her displeasure and ask him to back off?

I have one simple question to ask👇

Why didn't #ZairaWasim Express her Displeasure to the accused & ask him to back off even Once? We women do this all the time in Trains, Buses etc.

Even my 4 year old niece will do it. Is Zaira also a Dumb Bimbo like most #Bollywood stars are?

What are the laws to protect men?

#ZairaWasim got an FIR filed. If a man was on the receiving end, what Legal recourse would he have?There is NO law to protect Men. Radical Feminists will say that men enjoy being touched even without consent. Isn't that Sexist?

Why didn’t she change her seat?

While we want Juveniles to be tried as Adults, #ZairaWasim (17+) is a Kid? She doesn't- Complain to Cabin Crew or Ground Staff,Confront offender,Request to change her seat & instead goes LIVE @instagram when molested?

She's wise enough to Refuse to stand up for #NationalAnthem😉

We don’t know whose side of story to believe. Let’s wait for law to take its course before announcing any verdict on social media. However, one thing that we all want is that the guilty should be punished and the innocent should get justice.

What do you have to say? Let us know your views.

Police Arrested Accused After Zaira’s Molestation Complaint. His Side Of Story Is Totally Opposite Zaira
Rahul Gandhi Elected New Congress Party President. This Is How Twitterati Reacted