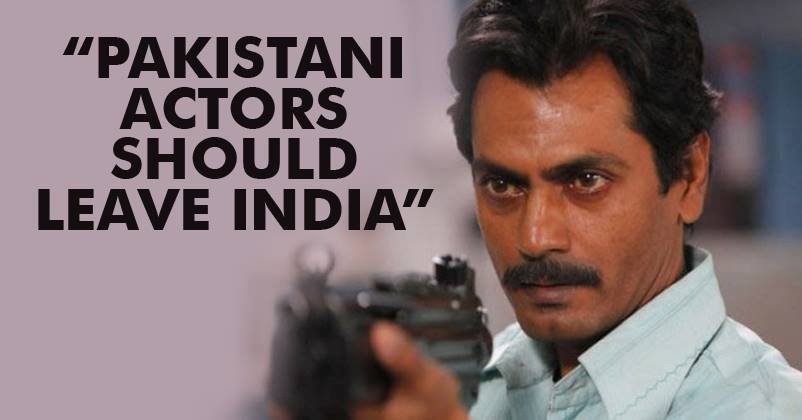 Emotions are something which are very powerful and have the potential to even shift mountains and change the direction of tides. India is currently going through a state where words like ’emotions’ and ‘sentiments’ are being considered the utmost respected thing. Yes, we are emotional when it comes to our country and we feel proud of it.

Lately, the topic of ‘Pakistani Artists Working In India’ is on a roll and every other person’s opinion is mattering the most. Well let’s just specify it and bring it into the focus region of Bollywood Celebrities only. You might have read our previous articles on various actors and actresses commenting on this controversial topic, but this is the first time when Nawazuddin Siddiqui came forward with a clear stand.

He didn’t take any diplomatic stand. For him it is the COUNTRY that should come first before anything. He was in a press conference at Meerut’s Bravura Hotel. He said, “Right now, the situation between India and Pakistan is very sensitive and they (Pakistani actors) should leave India”. Just like his role in Bajrangi Bhaijaan, people expected him to bridge a link between India and Pakistan, but he had his own strong opinions about this matter. Apart from this, the reason which made people think like that was the fact that Salman Khan had lately taken a stand which supported Pakistani Actors. The ‘Sallu Bhai’ craze is indeed a big thing and many actors blindly follow him and his beliefs by considering him as a GodFather in Bollywood. However, Nawazuddin Siddiqui didn’t give a damn about it and followed what his heart said.

When Siddiqui was asked about his disagreement with Salman Khan’s statement and his non involvement into the group of artists supporting Pakistani actors, he said,

“It is not about with which group of actors I belong to. It is a matter of our country. “Aur desh se badhkar kuch nahi hai” (There is nothing superior than our country).” Well, a big salute to Nawazuddin Siddiqui for taking a firm stand on this topic and clearly stating that it’s the country which needs to come first before anything.

Alok Nath Gets Trolled On Twitter For His ‘Sanskaar’ After His Son Was Booked For Drunk Driving!
This Poem By M.S Dhoni In His Own Voice Is Inspiring & Going Viral Over The Internet!