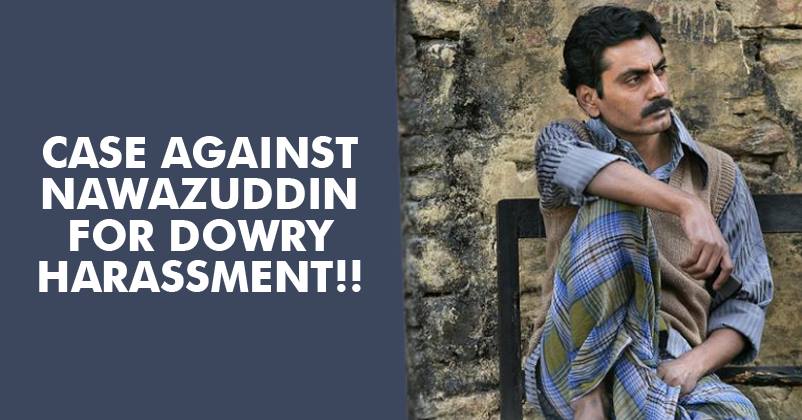 Back then he started off from nothing and today he has reached up to everything. He has seen his bad times, enjoying his present time but somewhere between it, he hasn’t seen his coming time. It is going to be tough. When someone alleges of dowry harassment, it is quite clear that the coming days won’t be that easy. Nawazuddin Siddiqui’s sister in law, Afrin, wife of Minazuddin, brother of Nawazuddin alleged that the whole family is harassing her for DOWRY. The news is indeed shocking as none of us had ever anticipated such allegation against him and his family. However, we can’t rule out the fact that this is just an allegation which hasn’t been proven yet. So believing in any kind of bizarre mob judgement will be foolish.

In her complaint she has accused her husband, brothers-in-law Nawazuddin, Faizuddin, Majuddin and sister-in-law Saima of harassing her for dowry. She met Superintendent of Police (rural) Rakesh Jolly in this regard and told him that she got married to Minazuddin on May 31, 2016.

However, before meeting Superitendent of Police Rakesh Jolly, she had first tried to approach the Kotwali police station, but they didn’t entertain her complaint. Currently no complaint has been registered against Nawazuddin and his family, but police are probing the matter. Watch this video where she is accusing Nawazuddin Siddiqui and his family members for Dowry Harrasement.

According to the police, if the allegation is found to be true, then a case will be registered against Nawazuddin and his family. The complaint has been sent to Budhana Police station for the probe. When media tried to interact with Nawazuddin Siddique for his reaction towards his sister in law’s allegation, no comments were delivered by him on this matter.

A court judgement clarifies the legal definition of dowry as

“Dowry” in the sense of the expression contemplated by Dowry Prohibition Act is a demand for property of valuable security having an inextricable nexus with the marriage, i.e., it is a consideration from the side of the bride’s parents or relatives to the groom or his parents and/or guardian for the agreement to wed the bride-to-be.” However, there have been quite a few instances where these laws were misused. In order to protect husbands from such fake and fabricated theories, a committee headed by 2 judges of the Supreme Court reviewed these ‘Dowry Laws’ which instructed police to follow certain procedure (Probing the matter) before arresting . Also the Supreme Court of India said, “…by misuse of the provision [IPC 498a – Dowry and Cruelty Laws new legal terrorism has been unleashed.” The above statistic has been directly taken from Wikipedia – With an approximately 60,000 such accusations per year, about 200,000 people are directly affected by these false accusations. On a serious note, we have no rights to become the judging panel of this matter. However, it is quite amusing to see a simple person like Nawazuddin Siddiqui being dragged into serious and unforgivable allegations like ‘DOWRY HARASSMENT’. Only time will tell us the answers.

Oh My God ! ‘Raees’ To Postpone Once Again & This Time ‘Kaabil’ Is Not The Reason….
2nd Day Collections Of “M.S Dhoni: The Untold Story” Prove The Power Of Captain Cool!