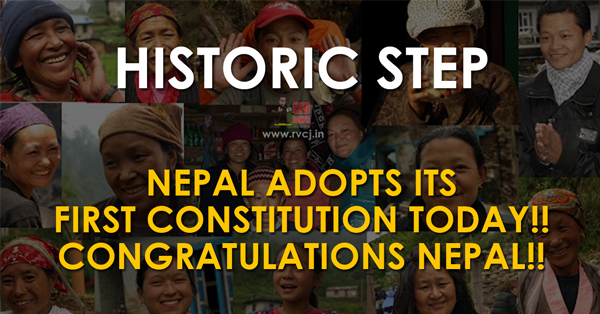 Nepal has seen so many things in the past 60-65 Years. A Country which faced massive massacre, War, Monarchy & Massive Earthquakes has finally something to rejoice and celebrate. Yes Nepal after about 65 years had adopted its first Constitution.
A country like India which is Multi-Ethnic, which has people speaking different languages, a country which now has different religions and people with different cultures living in, needed a constitution for their betterment and to safeguard the rights of one and all.
There were reports of violence and killings in the past weeks, for people protesting against the charter highlighting Adoption of Constitution in Nepal. Finally today i.e. Sunday 20th September 2015 the historic step was taken and President Ram Baran Yadav passed the resolution for adoption of the first Constitution of Nepal. Capital Kathmandu witnessed thousands of people cheering and applauding after this historic step was taken. The constitution surely will help the relation between India & Nepal to get even stronger in terms of trade & tourism.
Team RVCJ Wishes heartiest congratulations to Nepal and the people living in Nepal on this very special Day. And wishes a very good luck for the future.