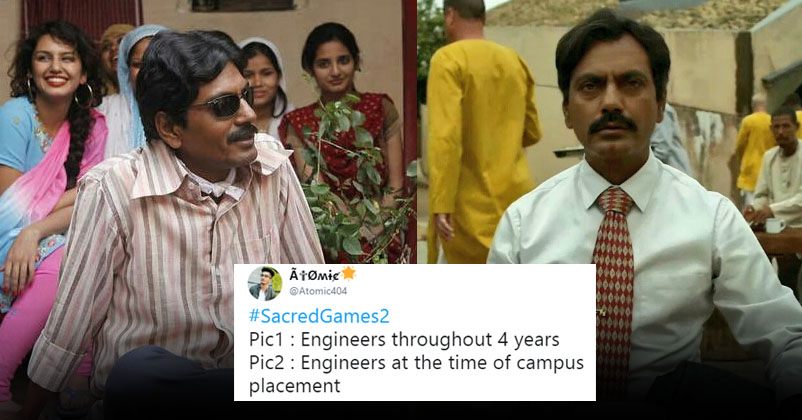 Indian thriller series ‘Sacred Games’ based on Vikram Chandra’s best-selling novel which is co-directed by Anurag Kashyap and Vikramaditya Motwani a Netflix original series received both critical appreciation and was loved by the fans. The gangster drama ended on a mind-boggling cliffhanger. Leaving the fans exhilarated for the next season.

On Tuesday, the trailer of Netflix India’s original series Sacred Games 2 is finally released and it’s even more thrilling than the first one. The next season is a continuation of the first one and starts right from where the first season ended. Fans are going gaga over the trailer and they’re eagerly waiting for 15 August to binge watch the entire series.

Now that the Sacred Games 2 trailer and release date are here, could you please stop threatening us?#SacredGames2

One particular scene has turned out to be a viral meme. The new trailer was transformed into hilarious memes and it is dominating the social media platform:

*While talking to crush*
Self respect ka: pic.twitter.com/NCp0v3kQBU

When your younger sibling knows a secret about you and they want the last slice of the Pizza. #SacredGames2 pic.twitter.com/wIYrEG77E4

*when a junior asks about life after 10th boards*#SacredGames2 pic.twitter.com/uh4tVOfXab

* When you are super prepared for your semesters but you are in CU and you don't know from where the questions come from * #SacredGames2 pic.twitter.com/PBNt1VCou3

When you and your brother are alone at home #SacredGames2 pic.twitter.com/rgjsr3HJwx

* In every special occasion *

Pimples to my face – #SacredGames2 pic.twitter.com/rr9Yc0C9UY

* Me chatting with the person whom I love *

When mom asks me to share my food with siblings/cousins

When your younger sibling knows a secret about you and they want the last slice of the Pizza. #SacredGames2 pic.twitter.com/wIYrEG77E4

Me to autowala friends when I see BEST BUS PRICE DROP.#sacredgames2 pic.twitter.com/zSPRCsApbM

Arya stark : I make a list of People who i am going to kill…

When Gamora and Thanos went to collect the soul stone

Kubbra Sait AKA Kuckoo From Sacred Games, Takes A Dig At Kabir Singh’s Director’s ‘Slap’ Comment
Anil Kumble Gets Trolled For Posting A Picture Of Him Traveling To See The World Cup