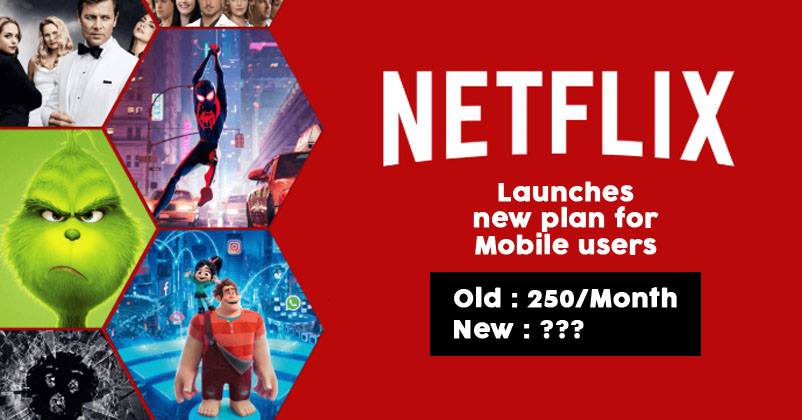 People who think that nobody cares for them, nobody thinks about them, Netflix proved them wrong and lowered the monthly plan for Indian mobile users. What more can you ask? Now you can enjoy unlimited series and films at cheaper rates.

One of the biggest OTT platforms Netflix has announced a mobile-only plan at an event in New Delhi. This plan is exclusively for Indian users and it will cost you only ₹199/month. Earlier the monthly plan of Netflix cost ₹250.

The Netflix mobile only plan in India launches today at Rs 199/month pic.twitter.com/oDMctcYvMe

However, this cheaper plan comes with some restrictions. Only a mobile or tablet user can use this plan and it is restricted to only one mobile device, unlike the older plan. And if you only prefer to watch HD qualities video then this plan is not for you, as this only allows standard definition viewing i.e ~480p.

While you can not cast the stream from your mobile to your laptop or TV but you can still download the videos and watch it later offline.

Since India is the biggest market for Netflix in the world, this plan is only for India.

India has the highest number of Netflix members in the world that stream on Mobile. pic.twitter.com/XrpRqbBFDO

Netflix is hoping to increase mobile users after launching this scheme. Here’s how Twitter users also reacted to the news.

Me after buying the new mobile-only Rs.199 plan of @NetflixIndia pic.twitter.com/B0SIXLfhyl

People Who Don't Even about the shit Netflix : pic.twitter.com/3w5UmSLyup

This Controversial Song On Lord Ram Is Facing Wrath On Twitter
Safety Stomach? A Woman Was Found With 1.5 Kgs Of Jewelry And Coins In Her Stomach