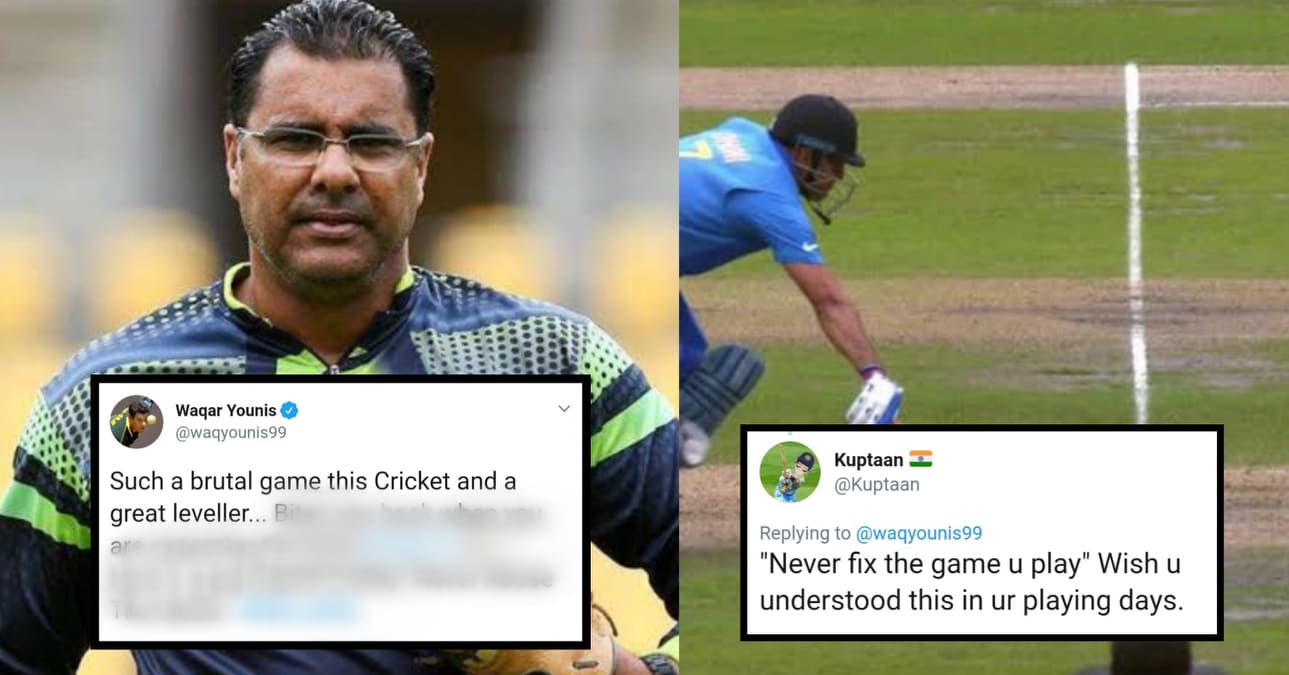 We are officially out of the World Cup, our Men in Blue fought hard and lost only one match in the series. Sometimes things do not go the way we think they should go and it is heartbreaking. With the top 3 players losing their wickets back to back, Indians had slim hopes to win. But the team did not give up. While netizens were unhappy some people were quivering with joy. Among them was Waqar Younis.

When India was playing England, if India would have won that game, Pakistan would still be in the game or so they say. India lost and people thought that they purposely lost to make Pakistan loose. Dhoni’s poor performance in the game added flam to the fire. Waqar Younis after India’s defeat posted a tweet saying that one should always respect the game and karma comes back. The tweet read,” Such a brutal game this Cricket and a great leveller… Bites you back when you are expecting the least #CWC19 I learnt a great lesson today “Never Abuse The Game” #INDvsNZL”

People were furious after this, some called him hypocrite after he was found guilty of match-fixing and some were pure angry by his tweet. See, how they reacted :

I think you learnt your lesson long ago when many players of @TheRealPCB were banned for fixing games.
Learn to develop better players in the country so you don't have to expect n blame other teams for not winning your games.
Also, India won the game that mattered #june16

don't you think you learnt it pretty late.. please impart this knowledge to the Pakistan team as well.. not surprising that all this while you didn't even know that you were abusing the game left, right and center.. since fixing and cheating was your sports culture..

I don't bother abusing you, again asking questions on sincier cricketers, when all you and your country player did was match fixing and spot fixing, ball tampering. It is the great leveler is what made your country the way it is now.. #CWC19

Absolutely right, a lesson learnt too late but never the less .. “Never Abuse the Game” pic.twitter.com/74NO3G1ELv

Absolutely right, a lesson learnt too late but never the less .. “Never Abuse the Game” pic.twitter.com/74NO3G1ELv

Afterall the Match fixing, Spot fixing, Ball tampering & other Shady ways in which you've played the game & brought direpute to your country..its funny that Now u hav learned this lesson!
Do ur immoral country a favour & preach this in Paxtan schools!!
Please FO!

and i learnt tendulkar has zero sportsmanship. he showed it against Pakistan 2017 CTfinal and now today. atleast praise the winning team if you can't what the F you were doing in stadium for last two days?

Waqar was sure given a taste of his own medicine.

Sanjay Manjrekar Takes A Dig At Jadeja After His Outstanding Performance Today, Gets Schooled By Fans
India Vs New Zealand: Was MS Dhoni’s Wicket An Umpiring Error? Twitterians Are Boiling