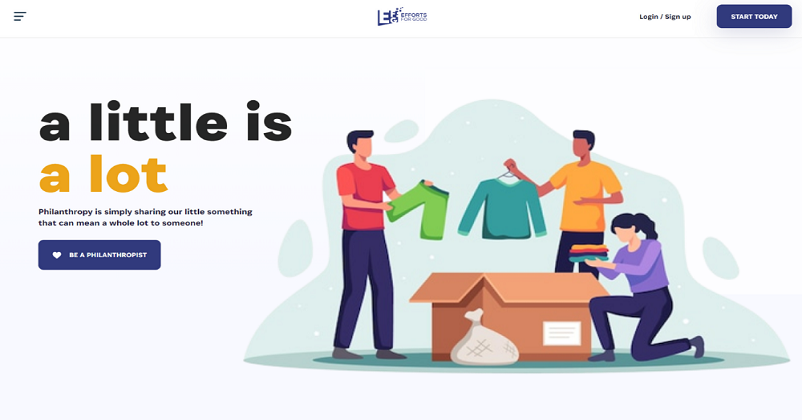 The Indian crowdfunding space is crowded with players like Ketto, Milaap, Impact Guru and the newest entrant, EFG – Efforts For Good, which claims to be the most sincere, structured and transparent product. We take a look at the evolving landscape around technology and how it can possibly shape a better world while solving a few complex issues along the way.

It is often easy to get overwhelmed with the sheer number of choices one has to make in a fast-paced world. The advent of the internet has paved way for connectivity on a scale the world had never seen before. With connectivity rapidly increasing, the entire world is slated to be connected to the internet by the end of this decade. The possibilities are immense with the advent of technology, earning potential and ease of payments.

We live in an internet-based ecosystem and have seen the rise of the gig economy. There has been a drastic increase in the earning potential of young Indians, and people in their 20s, without any generational wealth, now have access to enormous wealth. Platforms like Youtube and Instagram have become lucrative options for content creators to make a constant source of income. According to a report by Oxford Economics, The creator ecosystem at YouTube alone contributed an estimated ₹6,800 crore to the Indian GDP, generating more than 6.83 lakh full-time equivalent jobs in India in 2020. With the rise in earning potential, it is quite natural that a part of this wealth would eventually flow back into the economy through philanthropy and contributions. People actively seek credible and convenient avenues to channel their surplus income and fund social causes.

The traditional crowdfunding platforms and players seem to be losing their ground due to a lack of transparency and accountability. Focusing entirely on medical fundraisers, these platforms are often seen employing annoying marketing tactics driven by guilt and fear.

Talking about this, Manish Pandey, Strategist and Mentor to some of India’s biggest creators, said “I am too tired of watching the video ads that pop up while streaming videos where somebody is crying and towards the end, we are asked to donate money. I have become a product because I am being targeted over and over again. It’s time to end emotional marketing which lacks accountability.” 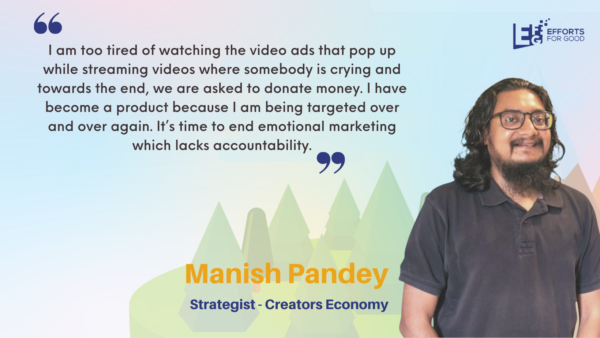 While more and more people are now willing to contribute to social development, the lack of transparency keeps them from doing so. Due to the sheer number of NGOs operating in the country, trust becomes hard to establish and citizens and potential contributors are left in a state of disarray and hesitation. Without a focused, planned and aggressive approach, social development takes a back seat. India is home to some amazing non-profits and innovators tackling several complex issues, but existing crowdfunding platforms are failing to support and amplify their efforts.

In an attempt to combat these issues effectively, EFG – Efforts For Good was soft-launched in 2019 by the founding team of The Logical Indian, Abhishek Mazumdar and Anurag Mazumdar. The Logical Indian has been a public-spirited media company, and EFG appears to be a culmination of their years of experience and encounter with the development sector.

EFG, while operating in a low profile, has seen some early success. During the pandemic, EFG has raised over INR 2 crores for projects like Khaana Chahiye, an initiative to cater to the unmet food demand of those in need in the city of Mumbai during the Covid-19 crisis and Ghar Bhejo, an initiative by Sonu Sood to send stranded migrants back to their homes during the Covid-19 pandemic.

After gathering a closer understanding of the landscape of community-funding, EFG – Efforts for Good has recently pivoted itself with the newly evolved version focusing only on six philanthropy sectors projects carried out by handpicked specialised non-profit partners. As they state on their website, EFG doesn’t charge any fee or commission from the non-profits at any stage. EFG sustains itself on an optional fee model that is voluntarily paid to EFG by its satisfied philanthropists. This is a unique business model as it requires EFG to work only in the best interest of the non-profits and projects as the project’s success would mean an optional fee from those backing it. Unlike other counterparts who are typically seen working on a flat commission/marketing fee, leaving them with less concern about the final outcome of campaigns and projects they onboard.

Elaborating on this further, Abhishek Mazumdar, The Co-founder and CEO of The Logical Indian and EFG, said 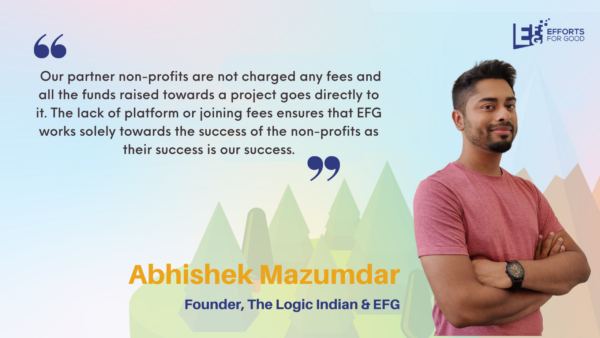 “We believe in solutions that are sustainable and preventive in nature. The non-profits we work with are experts in what they do and ensure that once a project is completed, it can sustain itself. Our NIPs (non-profit implementation partners) are not charged any fees and all the funds raised towards a project goes directly to them. We have all the reasons to ensure the project’s success. Their success is our success. We just can’t sit back, relax and keep a cut. We’re glad to be backed by some of the most disruptive leaders from the social innovation space that includes Anshu Gupta from Goonj and Sonam Wangchuk from HIAL. They are actively helping us and our partner non-profits ensure the product’s effectiveness and prioritise the right kind of projects. We remain obsessed and committed to transparency, and this includes third-party audits of EFG and our partner-non profits, everything easily accessible on EFG.”

To ensure that their efforts toward social development are fully optimised, they have elicited the expertise of Sonam Wangchuk – Founder of SECMOL and HIAL, Anshu Gupta – Founder of Goonj and Manasi Joshi – World Para-Badminton champion and Disabled rights activist as their Board of Advisors. With their wisdom and guidance, EFG is on a 25-year mission to accelerate social development by democratising philanthropy.

Talking about Efforts for Good and its vision, Sonam Wangchuk, founder SECMOL and HIAL stated 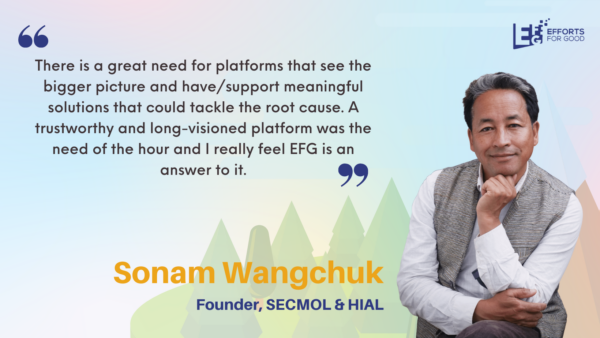 “There is a great need for platforms that see the bigger picture and have/support meaningful solutions that could tackle the root cause. A trustworthy and long-visioned platform was the need of the hour and I really feel EFG is an answer to it.”

Click here to find out more about Efforts for Good and take your first step towards philanthropy.

RVCJ Plex: For The Creators, By The OG Creators Of Social Media