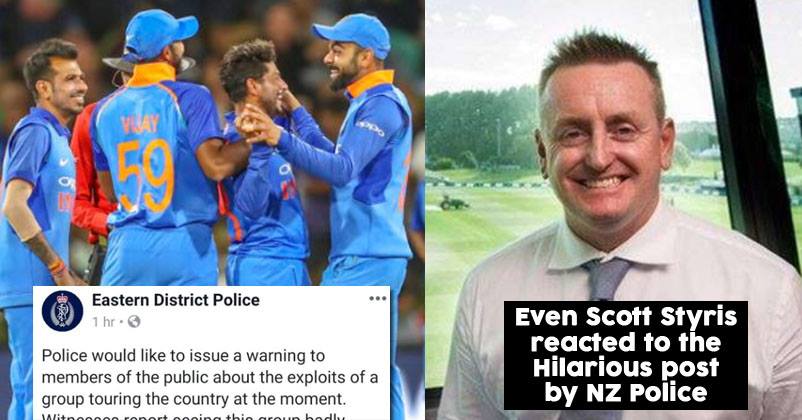 As we all know team India is playing a terrific cricket in their current New Zealand tour. After defeating the Aussies in their very home ground, they are dominating the game still.

During the five match ODIs, India is already leading the game by 0-2. With only three more games to go the New Zealand players are quite embarrassed already.

New Zealand cricket team lost the first match by eight wickets whereas the second match by ninety runs. Staying put with the current results, the police department of New Zealand gave a funny understanding of the situation.

They issued a post for the citizens of New Zealand stating that a very dangerous group of people is roaming around in their country. They also added that this group has already assaulted many innocent people and is in the look out for more.

They said this assault occurred in Mt Maunganui and Napier and people should stay away as they are carrying bats and balls too. Check out the post by the Eastern District Police of New Zealand.

This is so hilarious that even Scott Styris shared it on his official twitter account. Check it out.

So, isn’t the New Zealand police Department too clever?

Pujara Didn’t Walk Out After Ball Edged His Bat & Caught By Wicket-Keeper. Twitter Slammed Him
Hardik Pandya Made A Stunning Comeback. Netizens Called Him Lagaan’s Laakha.