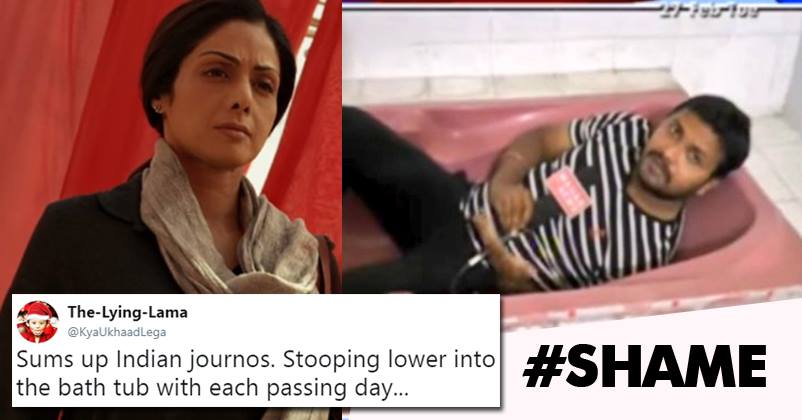 The Indian news channels are more famous for creating news rather than showing truth and now they have stooped to a new low by sensationalising the death of veteran actress Sridevi.

Sridevi died on the night of Saturday in Dubai where she went to attend the wedding of her nephew Mohit Marwah. Earlier it was said that the reason of her death is heart attack but later on, the forensic report stated that there were traces of alcohol in Sridevi’s blood. She lost her balance, fell in bathtub and got drowned accidentally. 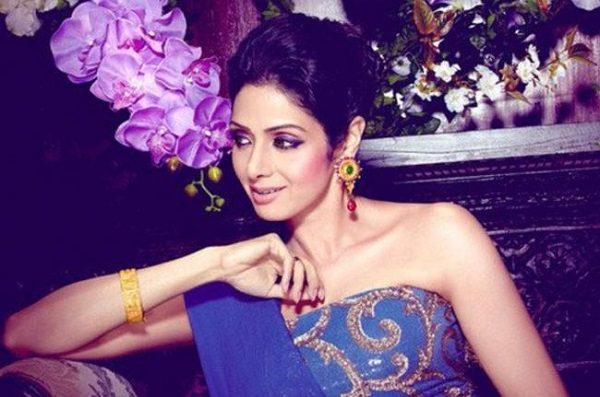 The whole Indian media panicked at the disclosures and started speculating all the angles behind the death of the actress but some news channels crossed all the limits of insensibility.

Check out some of them:

1. This news anchor is shown in the bathroom with a glass of wine in the bathroom as if they are sure that the actress was drinking inside the bathroom and she was so under its influence that she lost her balance. They are damn determined to prove that Sridevi was a drinker.

One anchor is in "the" bathroom, complete with a wine glass! Wow! Excuse me while I step out to bang my head against a wall. BRB. pic.twitter.com/XTdLNI2ckO

2. They have renamed the bathtub as “Maut ka bathtub (Bathtub of Death)” and with Sridevi’s photo on the wall, this news channel must have solved the case.

3. This channel has gone so low that they have shown Sridevi inside the bath tub. Now this is really the death of journalism.

4. This south Indian channel is not only showing Sridevi in the bathtub but also Boney Kapoor in the bathroom as if they have reconstructed the scene and solved the case.

5. Now there is no doubt that the reporter has no brain otherwise he wouldn’t have done this:

Sums up Indian journos. Stooping lower into the bath tub with each passing day… pic.twitter.com/WxZStMVVm1

This is how social media users reacted over it:

This truly depicts the condition of journos nowadays:

Disgusting to the core:

This south-Indian News channel broke all the records of douchebaggery! pic.twitter.com/JZXkCJCM6i

Did they have a camera in her bathroom?

They even know how much wine she drank.. Heights of non-sense!

And the channel knows exactly how much wine she drank (if she drank any at all). Disgusting. Nauseating. Shameful. #NewsKiMaut pic.twitter.com/SrfBSFM5s9

Rakhi Said She Doesn’t Want To Live Without Sridevi. People Trolled Her For Overacting & Publicity
Sridevi Is Not The Only One Who Died In Bathroom. Here Are 8 Other Celebs