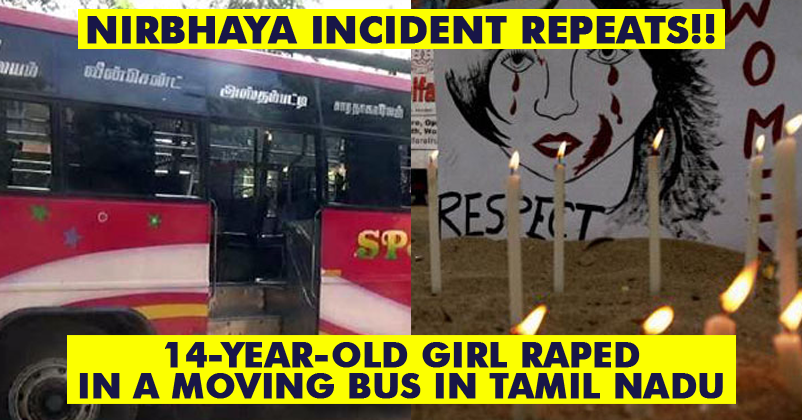 Just a month after Indian judiciary announced death sentence to the guilties of the horrifying Nirbhaya rape case (2012), another one has appeared and has made our heads bend with shame.

A 14-year-old girl was gang raped by a group of 3 men (2 drivers and 1 conductor) while she was travelling in a private bus in Tamil Nadu’s Salem district, a place 350 kms away from the state capital. As per the local police, the girl had finished her class 9th this year and after a fight with parents, she boarded the bus in which she was moving to and fro till late night.

After the last trip, the crew parked the bus in an isolated area about seven kilometres away from Omalur, and allegedly sexually assaulted the teenager one after the other. “The girl says the men threatened her to not get off the bus. She escaped and screamed, when the third man assaulted her sexually. Local people rescued her and handed over the men to police officials.”

The parents of the girl are laborers and work on the daily wages in Salem. As per the police, the girl had run away from home twice earlier as well.

Right now, the girl is being counselled and looked after at a children’s home. It’s not clear whether she underwent any medical examination so far.

A senior police official told PTI that the three were arrested and were being questioned.

“A total of nine sections including those from the IPC, Protection of Children from Sexual Offences (POCSO) Act and SC/ST (Prevention of Atrocities) Act, have been invoked against the accused.”

The police were on the lookout for another person, stated to be involved in the case, though not part of the sexual assault.

It feels really terrible to even talk about it. How can humanity shrink to this shameful level? Just when we thought Nirbhaya case would be known as the most horrific and last such case in our country, this one happened and made us speechless.

Police Released Sketches Of 3 Suspects Of Gurgaon Gang Rape Case! They Should Be Hanged To Death!
Man Was Taking Drugs In Public Toilet. When Caretaker Stopped Him, He Killed Her 21-Yr Son