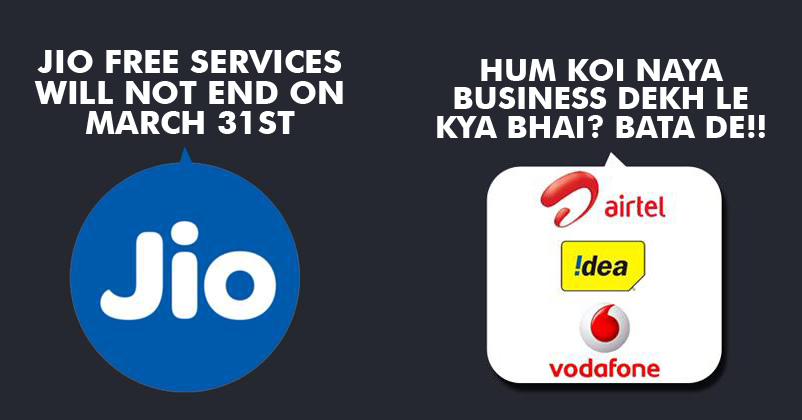 Introduction of Jio had brought about a storm in the telecom market. Earlier it launched a lucrative offer of unlimited free calling, free 4G data and messages till the 31st of December 2016, which was further extended till the 31st of March 2017. After 6 months of free-run, Mukesh Ambani might once again surprise you.

Well, the company now plans to extend this plan for 3 more months; however, data services will be charged at a nominal rate. Only voice calls will be free. According to sources, Jio is developing a new plan, the validity of which will be 3 months i.e. from 1st of April 2017 to 30th of June 2017. Jio subscribers need not worry about the price as it would be very nominal; just Rs 100 would be charged for data.

The rates are kept quite affordable because the company fears it might lose customers. Rs 100 for data is very low as compared to market rates. When the company feels that it is the right time, it will increase the rates; it doesn’t want to raise it significantly. By charging Rs 100, Jio will also be able to judge how many consumers are actually interested in its services.

“We expect many will go back to using their primary number if the (free) offer is withdrawn, and Jio could well lose over half its subscribers if it starts charging more without fixing the call drop problem.”

“But it has to come up with cheaper tariff because other incumbents have already launched reduced packs. This price war is a burden on the company (telcos) and the government loses on licence fee as well.” Jio will have to plan really well if it wants the subscribers to stick to it even after the free offer is over. Already there is a lot of competition among telecom companies with respect to data packs; so even if 1 wrong step is taken, it will lose its hold over the market. But if the 3-month extension gets approved, it would be a bad news for other competitors like Vodafone, Idea, Airtel, Aircel and BSNL. Let’s see what happens.

Top Woman Officer Filed Fake Molestation Case & Now Has To Pay Rs 10 Lakh To The Victim
Twitter User Put A New Note Of Rs 500 In Washing Machine. What He Found Out Is Shocking As Hell