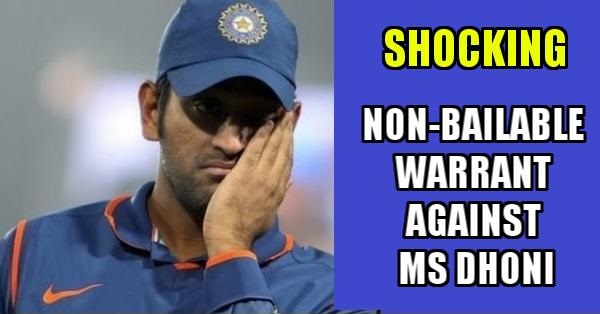 A non-bailable warrant has been issued again Indian cricketer MS Dhoni on Friday by an Ananthapur court for hurting religious feelings of people since he posed as Lord Vishnu for a magazine’s cover photo. Here we are talking about Business Today’s 2013 edition wherein he gave the pose of an Indian God and for the same, will have to present in court on 25th February. Last year in September, criminal proceedings against the cricketer were stopped by the SC. Additionally, a notice was issued by the court for Jayakumar Hiremath, the social activist who lodged the case against Dhoni. Nevertheless, Karnataka High Court denied to cancel the case which compelled the cricketer for filing an appeal in the SC.

MS Dhoni didn’t receive summons from an Andhra Pradesh local court but blames of ignoring the same have been put on him. According to Rajneesh Chopra, his lawyer, non-bailable warrant which had been issued against him was “erroneous”. In his words, “Mahendra Singh Dhoni has utmost respect for the judiciary but the fact of the matter is that he has personally never received any summons with respect to the present case; therefore the order appears to be erroneous.”

He further said, “Even as such, proceedings in a similar matter pending before the Hon’ble District Court of Bengaluru, Kartanaka has already been stayed by the Hon’ble Supreme Court of India. In this matter, accordingly we will approach the courts and seek appropriate directions thereto.”