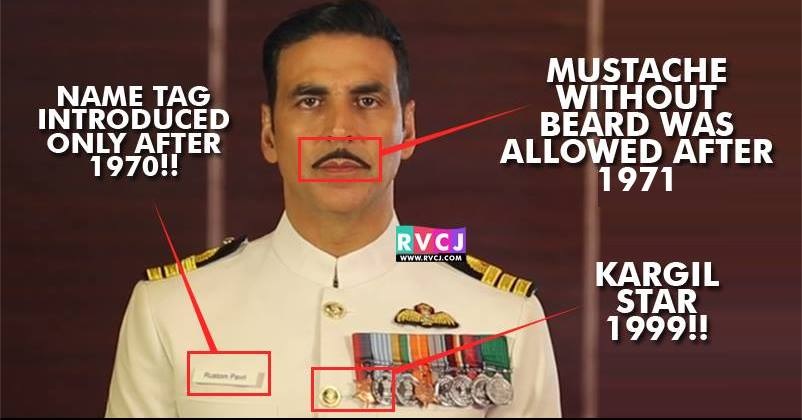 ‘Mohenjo Daro’, the Ashutosh Gowariker movie has always been receiving criticism for factual inaccuracies in the trailer as well as the poster. Yes, many historians lashed out at the maker for depicting incorrect history in the film. While some pointed out errors in the complexion of the actors, there were others who pointed out at the errors in the dressing style. However, Ashutosh had claimed that he had well-researched the topic, thereby avoiding controversies. However ‘Rustom’ is the latest movie to bear the brunt of such a controversy. Yes, even though this Akshay Kumar starrer is receiving a very positive response from audience as well as critics, it has some flaws which not everyone must have noticed.

Well, if you are wondering what the mistakes are, we are talking about the several mistakes in his Navy Uniform. Yes, Sandeep Unnithan, the executive editor of India Today pointed out many errors in Akshay Kumar’s uniform in just one tweet! He believes that Akshay’s rank is incorrect and unjustified. Want to have a look? Here it is ….

Bollywood can never get the uniform right. The horrid #Rustom (set in '59) is no exception. pic.twitter.com/t7NyaJaGdM

The image points out all the inaccuracies in the uniform. Although Akshay’s body language and look in the film is flawless, no one expected that there would be so many errors in the uniform. The movie revolves around the 1959 Nanavati murder case, but many things seen on Commander Rustom’s uniform are invalid. Let us explain you the mistakes in the uniform as well as other mistakes which aren’t mentioned in the tweet!

The Nelson’s Ring on his Shoulder boards is reversed!

The name ‘Tally’ was introduced in the year 1970s only.

Akshay was shown sporting a moustache without a beard. However, in 1959 (The period which is shown in the movie) it was not possible as that time it was compulsory to sport both the beard and the moustache.

The work outfit on warships was white shorts. Yes, as compared to today, the uniforms of naval sailors were different that time.

The arm’s agent character in the movie speaks of R class destroyers, Kilo Class submarines and Petya class corvettes. But wait! They appeared only after 1960s and 1970s.

In the 1950s, the standard sidearm that was used was either the Webley & Scott Revolver or either the Smith & Wesson revolver. But in this movie, the 9mm Beretta was shown which was introduced only in the 1970s.

What do you have say about the same? Do share your views in our comments section below.